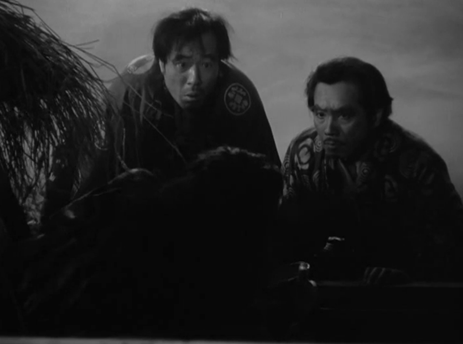 During my film odyssey, I first met Kurosawa, then Ozu, and finally Mizoguchi. Each with similarities and most importantly their own personal touches when it comes to the language of cinema. Kenji Mizoguchi seems especially at home with Japanese folk tales in the jidaigeki mode of Japanese period-dramas. Ugetsu finds its inspiration in such a fable from 18th-century author Ueda Akinari, and it also gathers some inspiration from scroll painting. As the narrative arc begins, it’s as if the story is slowly getting rolled out bit by bit with the camera slowly tracking with the action.

In this case, our subject is a group peasant villagers who live with their wives. Genjuro is a farmer with a penchant for pottery, who has a little boy together with his wife Miyagi. Then, there is the often buffoonish Tobei, who has fantasies of one day becoming a samurai. His wife Ohama often becomes annoyed with his obsession. When marauders come and uproot them from their homes and yet they remain together. However, with the progression of time, Genjuro has become more obsessive over his pottery as avarice overtakes him, and Tobei can no longer quell his desire for military honor. Miyagi particularly notices a change in her husband, because money has become his everything and he has put his heart and soul into that kiln of his. True, it seems to pay heavy dividends when he takes his wares to the marketplace and gets a pretty penny, while also meeting the ravishingly beautiful Lady Wakasa.

For our male protagonists, their wildest dreams begin to play out. Genjuro has begun a euphoric fling with his new mistress with little concern for his wife and child he left behind. Simultaneously Tobei in a stroke of good-fortune captures the severed head of a high ranking general. Although he’s a nobody, he gets in with the right crowd and his greatest wish is granted. He becomes a big shot samurai complete with weapons, armor, tassels, and an imposing entourage.

Meanwhile, unspeakable things are happening to the women in their lives, but the men seem to be lost in their dreams. When they finally are given a heavy dose of reality, it can be painful, even violently chaotic at times. And yet the reality check proves necessary because in a way it allows these men to shake off the ethereal and live in the present — allowing them to be more fully realized versions of themselves.

Mizoguchi rather like Fellini has a great interest in the supernatural or at least dream worlds. It’s far from nightmarish horror at least in the modern sense, but it is an everyday type of horror, where husbands act out on their darkest desires, family members die, and so on. Some would say this is far worst because it hits closer to home. The world of dreamscapes and ghosts overlap with reality.

The director is also constantly utilizing long takes, but they’re far from stagnant, very often panning to the left to accentuate the feel of a scroll being unfurled. Especially in the marketplace you get the sense that you could easily be lost in a sea of people, but Mizoguchi only goes to close-ups at the most opportune moments. Otherwise, he is best suited in pseudo outdoors settings — integrating architecture and nature in perfect cohesion. These facades are put up for people to interact with whether it’s a hut or an outdoor pool, but it never loses its naturalistic beauty.

It feels quintessentially different than his contemporaries, allowing for a thoroughly unique view of the human condition. Certain types of ghosts haunt all of us whether they are choices that we wish we could take back or the hand we are dealt when our lives began. Thus, Ugetsu is remarkably poignant even in its antiquity.