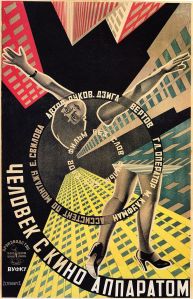 Watching a film like Man with a Movie Camera makes me disappointed that there are not more films like it, because what it does, along with the most historically significant films of our times, is transport us to a different time and place we can never fully know or comprehend. Dziga Vertov does that with Soviet Russia circa the 1920s, and it’s pretty amazing. It doesn’t have some grandiose agenda but acknowledges flat out that it is simply an experiment. What it does so well is stripping film down to its most basic components. Consecutive moving images. The images that end up within and outside the frame.

There’s an inherent difficulty placing Man with a Movie Camera up against other films because it functions so differently. It has such vast importance on an experimental and inventiveness spectrum. It’s not a narrative that will grab hold of your interest and it’s not even made in the typical documentary form that we are used to. However, if you quiet yourself for a few moments, it really does have a fascinating quality. If we just sit back and watch, we can marvel at the little things as if we were just sitting on a bench and perhaps watching the world going by.

We see the streets of Russia in cities like Kiev and Moscow. The birds, the people, and even the movie theaters, all comprising day to day life. It actually feels rather like the German silent People on Sunday (1930), and it is crazy to think how mundane this communist society feels. Then, there are other moments that are quite invigorating or at least they get the blood pumping. Cars, trains, machinery, water, in constant fluid motion and it’s a spectacularly relentless rush.  Vertov even does some photography of athletes and sports which feels very much like a precursor to Leni Riefenstahl’s work in Olympia (1938).

There are other times where Vertov is literally playing with the medium. Playing with the film images, still images, and seemingly anything else he can think of. But he warned us beforehand so it’s quite alright. There’s double exposure, aerial shots, split screen, slow-motion, stop-motion, and probably so many other techniques and tricks that we easily take for granted.

Also, we hardly think about the pace of these images, because they feel so normal. But that in itself should cause us to stop and back up for a moment. Man With the Movie Camera has an average shot length that was unheard of at the time. Instead of over 10 seconds, it was going about 2 seconds. That’s about what you get with your average blockbuster now, but when Vertov did it, people thought it was abrasive for its sheer speed. It was different than anything they had ever been subjected to before and yet it would appear that over 80 years later we are most certainly indebted to this cinematic experiment. It’s one for the ages because even if you’re not fully captivated, it’s hard to downplay how influential this work was. It revolutionized and totally rearranged how people perceived film.