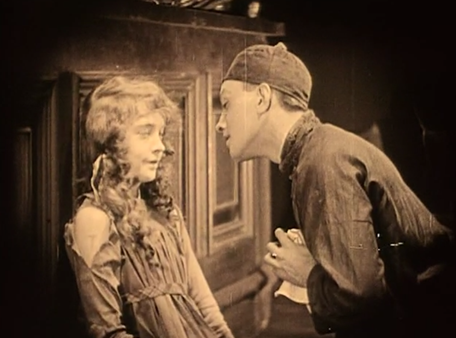 Broken Blossoms or The Yellow Man and the Girl. How do you deal with such a film coming from modern sensibilities of race and romance? It actually turned out to be easier than you would think, but not altogether straightforward. D.W. Griffith is no stranger to racial controversy in his films. because his archetypal Birth of Nation (1915) is known as much for its influence as it is for its depictions of African-Americans and the KKK.

For Broken Blossoms, he places the microscope on Asians and in this case a “Yellow Man” or “Chink” named Cheng. It’s not necessarily a good start, but it’s important to realize the lens and the times this film comes out of. Those terms are offensive and seemingly insensitive to us, but back in the teens, those terms were commonplace. Thus, if we put that aside for a second, it becomes important to look at actual depictions and objectives.

Cheng (Richard Barthelmess), who was indeed portrayed by a white actor, is characterized as a peaceful and kind individual looking to live in harmony with his fellow man. Bruising boxer and abusive father, Battling Burrows, is our obvious antagonist and the complete opposite of Cheng. It’s not simply a clash of race, but of temperaments, and kindness versus hate. The First Lady of Cinema Lillian Gish plays Burrow’s long-suffering daughter Lucy to perfection. I cannot remember the last time I had so much pity for a single character because with every close-up or piece of body language, Gish seems to suggest her horrible plight. She is so sweetly demure and yet so much tragedy is placed in her path.  As an audience, we cannot help but have compassion for her like Cheng. Her father constantly expects her to perform housekeeping duties and beats her whenever he pleases. In a sense, Cheng is her savior, but Burrows isn’t too happy about that.  The idea that there could be any type of love between his daughter and this “Chink” is out of the question. 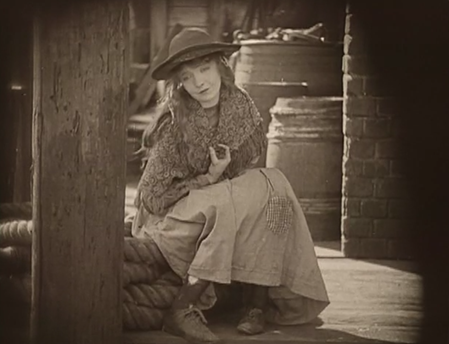 I suppose in a sense this is a love story and we want both these characters to be happy. One inter-title says of Cheng: “The beauty that all Limehouse missed smote him in the heart.” It’s a beautiful line and suggests the wonderful connection that these two seem to have. Although the dream loses a little of its charm when Gish’s character calls her suitor “Chinky.” It was in this moment where I stopped feeling sorry for simply Gish, but also her character. She seems like a girl like Mayella from To Kill a Mockingbird, who is bred with racism and yet she becomes so lonely in the process. All the abuse leaves her empty and searching for something. In that case, her only outlet was wrongly-accused mockingbird, Tom Robinson. In this case, it’s Cheng, the only person who seems to see Lucy Burrows differently.

I cannot speak for others but I can forgive Broken Blossoms for some of it’s more unfortunate moments and I’m sure Birth of a Nation would require a lot more dialogue. There are certainly numerous outdated, rudimentary views here from Southern-bred director D.W. Griffith. But I think if we look at the bigger picture, this is a film that attempts to point out evil and bring to light a little beauty even if it comes from an Asian and a defenseless young girl. I not sure what to make of it. Can we call it a clear-cut interracial love story? Maybe, but perhaps that’s not the biggest issue. This is a film that tries to move its audiences by evoking emotion and deriving pity for its protagonists. It’s a far more intimate portrait than Griffith had done before. On that level, Broken Blossom succeeds.