Journey to Italy is the splintering of a relationship where the slivers of bitterness begin to wedge themselves under the skin. It’s like slow, painful, nagging torture. Roberto Rossellini’s noted romance film feels like the antithesis of Roman Holiday. It avoids the other film’s bustling streets for more secluded getaways. It leaves behind fairytale romance and fun, for the bitter onset of marriage and middle-age. It seems hardly exciting, mostly driving and sitting, drinking and eating. Rather droll to say the least. And yet this in itself is juxtaposed with lively impassioned tunes and historic pieces of architecture and sculpture snuggled up against the Italian countryside. Because it is a goldmine of culture whether you look at Pompey or the remnants of the Greeks and Romans. There is a glorious history here and yet it makes for a rather meandering backdrop for our two stars Ingrid Bergman and George Sanders. Again, Bergman especially was a big name (and at the time Rosselini’s lover) and though usually a supporting player Sanders was usually held in high regard. They feel like the exact inverses of Gregory Peck and Audrey Hepburn, in a way that’s rather intriguing. 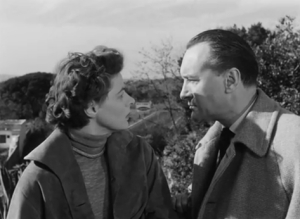 Yet again, as an audience, we do feel like tourists taking in the sights, but this time we’re riding along with a couple who don’t know what to do when they’re alone together. They don’t know what one is to say or how one is to act, because, in all honesty, they haven’t tried too hard. We don’t get much of their backstory, but they are certainly well-off because he takes his work seriously and it shows. But he hasn’t taken his marriage all that seriously and that shows too. His wife is more like his partner in this business endeavor they have going. She keeps up appearances, and he can offer her a lot in return, but hardly love.

It struck me that is a film about a faltering relationship and here is a couple that seems to be apart as much as they are together.They think that the best thing they can do is stay away from each other because no damage can be done that way. There’s jealousy, pettiness, biting sarcasm, all ready and waiting to be unleashed. Alex fosters a liking for a young Italian girl, and although Katherine doesn’t know all the details, she suspects as much from him. To combat Sander’s snide tone that can cut to the quick, Bergman counters with a thick layer of sulking. 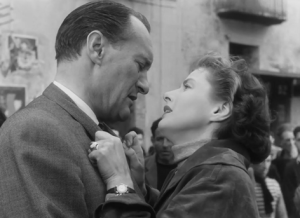 Thus, I’m not sure about the denouement of this film. Will they stay together or get the divorce that they both seem to have come to terms with? It seems like they might possibly make things work, or is that just the work of the romantic Italian countryside around them? Because no passionate embrace can alleviate and completely overshadow their myriad of problems. They are unable to communicate on a meaningful level, and they treat each other rather poorly more often than not.

In fact, this film is an interesting study, but there is a lack of investment in these characters. After all, it’s only a quick snapshot that gives us a feel for a relationship. I’m probably partial to the similar feeling Before Midnight (2013) because we are already given two films beforehand to truly grow invested in the characters and their story. But there’s no doubt that Rosselini’s film with Bergman and Sanders is well worth the journey.