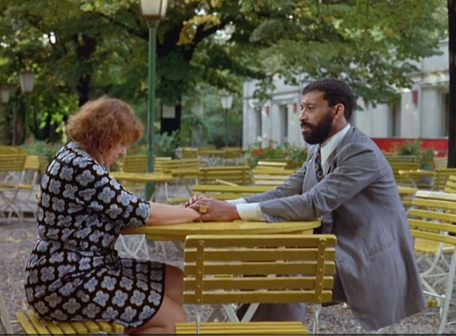 Werner Rainer Fassbinder is one of those artists known for his tumultuous personal and political life, and yet with all the dialogue swirling around his backstory and untimely death, there is no doubt that he sent a charge through the film community that is still being acknowledged today. The New German Cinema of the 1970s breathed new life into an industry and created a massive impact. Part of the fact is that Fassbinder’s work hearkens back to his forefathers while constructing a space within the medium that was all his own. That’s what the great filmmakers do. They take what has already been done, grab hold of some inspiration, and run with it into some new uncharted territory.

In the case of Ali: Fear Eats the Soul, he takes the work of 1950s melodrama master Douglas Sirk and transposes it to his contemporary Germany. His particular inspiration is All That Heaven Allows, which revolves around the shocking romance between a respectable woman and her younger suitor. That in itself makes for a juicy piece of drama, but Fassbinder expands on that by adding a racial component. Always fascinated by topics of race, Fassbinder looks at an elderly German lady (Brigitte Mire), who begins to form a bond with a much younger Moroccan laborer named Ali (El Hedi ben Salem). 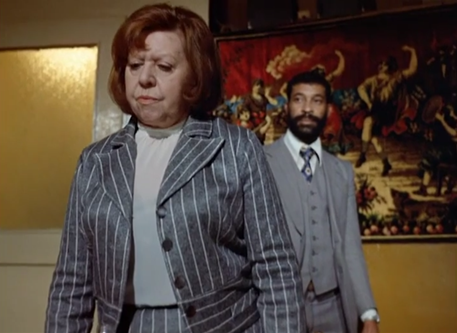 What begins as a small gesture, soon enough actually develops into something more, because once they sit down to coffee, they realize they actually appreciate each other’s company. Although I don’t understand German, the subtitles make it clear that Ali’s German is rather rudimentary, and yet that matters little to Emmi. She just enjoys having someone to talk to.

Emmi works as a maid and her husband is deceased and her children are grown up. She’s lonely. Ali has a group of friends from his homeland, but he feels like he’s treated less than human in Germany. Emmi’s different than your average German, but then again, her first husband was a Pole during the Nazi regime, so she’s no stranger to going against the grain. To her, it’s not a big deal. It’s just gets blown up by family and the tenants around her. Her nosy neighbors are quick to gossip and they all have a heavy case of discrimination. In fact, the unlikely couple is surrounded by narrow-minds sitting atop old bodies. A prime example is the local grocer, who ignores Ali, before changing his tune since he wants Emmi’s business.  But even Emmi’s children are not pleased. You can understand being surprised and a bit dismayed, but once a television set is kicked in, there’s automatically more to it. It’s not simply anger in it being such a rash decision, but the fact that Ali is a foreigner (and much younger). And yet all these separate issues are so closely intertwined it becomes an interesting situation. More often than not it’s the pervading bigotry that is the most noticeable.

Although the issue of age plays a role too, because at times Emmi looks out of place with Ali’s friends, and the same goes for Ali among her friends. It even leads him to a one night stand with the sultry bar owner (Barbara Valentin).  But Emmi is a very forgiving soul and in her, Ali finds grace. I’m not sure if I concur with all the conclusions that Fassbinder draws, but I can respect his stands on race. In fact, when Ali alludes to the catastrophe in Munich during the Olympics in ’72, such a current events make this prejudice toward Arabs all too real. It was a real pertinent issue and it still is to this day.

As for Fassbinder, he certainly knows how to work around his sets. The composition of his scenes is simple, but vibrant in mise-en-scene. He certainly has a touch of Sirk, being a little less luxurious, but still as bright. The closest modern example I think of is Wes Anderson as far as utilizing interesting color schemes and symmetry to frame shots. Also, there are quite a few times where Fassbinder maintains a shot for seconds on end. In such moments, it feels like we’re looking at a painting in a Fassbinder gallery. And it is exactly that. Art with an emotional depth from one of the foremost German masters.