Director Frank Borzage’s Stage Door Canteen is a gentle-handed piece of propaganda. It plays out rather like a scripted 1940s wartime reality. It’s less a film and more of a historical relic commemorating the eponymous Stage Door Canteen in New York City. Thus, any effort to give it some sort of rating almost seems beside the point, because it was meant to be a rallying cry of comfort, entertainment, and escape from the war right outside. It met the general public right where they were and inundated them with mega star power. This wasn’t the only nightclub or film to do this either. The Stage Door’s west coast counterpart was the Hollywood Canteen, and it received a film treatment of its own in 1944.

In truth, the real nightclub was still in full use every day so the next best alternative was the RKO Lot in Culver City. That’s where it all happens like a day in the life. We follow three soldiers: the perfect cross-section of white red-blooded American G.I.s. Each one gets to dance and talk their last days away with a pretty girl serving as a hostess at the canteen. Each one of them will never forget it.

The entertainment is full of partial cameos, pop-ups, and performances from a plethora of stars. For even the most well-acquainted modern viewer, it’s hard to recognize all the faces and names that show up. Katherine Cornell, Count Basie, and Yehudi Menuhin are a few such figures who come to mind. 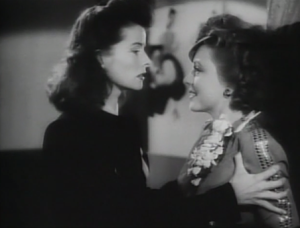 There are also strategic vignettes sprinkled throughout to boost morale and the camaraderie between allies. A few Brits can be heard taking part in the gaiety and making friends with our protagonists. A table of Hispanic soldiers takes in a floor show. One of our hostesses gets a moving letter from her older brother in the marines who is bent on returning to his family and proving that his training can outlast any “Jap” out there. There’s a last-minute marriage ceremony that we are privy to. Sam Jaffe introduces the audience to a few Russian allies, an Australian soldier has just returned from the front, and several Chinese air cadets get a rousing appreciation. Merle Oberon (the only actress close to being Asian in the film) gives them a stirring sendoff. Finally, Katharine Hepburn drops in for the premier cameo, to tie together all the loose ends and rally her fellow men and women to keep on keeping on for the sake of the country, so that the Allies might win the war.

From our modern day perspective, this might all come off like saccharine hogwash, but that’s not giving the material its due sensitivity. For that point in history, it was exactly what the American public was looking for. Today it’s a fascinating piece of remembrance. Then, it was still a story with a “to be continued” ending.