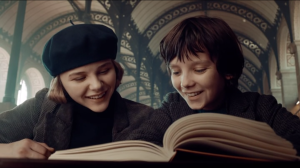 “If you’ve ever wondered where your dreams come from, look around, this is where they’re made.” – Ben Kingsley as George Melies

Hugo is the most curious of Martin Scorsese movies in recent memory. Nowhere within its frames do we see Robert De Niro or Leonardo DiCaprio. There is a complete lack of profanity or violence, and yet it proves wholeheartedly that he is a masterclass filmmaker -– one of the best that we still have the pleasure of observing.

In this case, he took the story The Inventions of Hugo Cabret by Brian Selznick and transformed it into a visual feast of turn-of-the-century Paris, while also crafting a love letter to the very roots of cinema.

Hugo (Asa Butterfield) is now an orphan and spends his days scrounging for food and trying to befuddle the stickler of a station inspector (Sasha Baron Cohen), who is intent on sending all stray children to the orphanage. This is Hugo’s life as he fixes clocks living inside the labyrinth above the train station, and trying to rehabilitate a mechanical automaton that his dad was determined to salvage before he died suddenly. 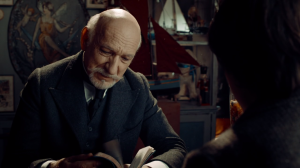 Aside from the inspector, the station is full of a wide array of charming individuals who generally exhibit temperaments far more personable. However, the local toy shop owner (Ben Kingsley) is rather an odd fellow, who keeps to himself, but Hugo is wrong to cross him. He’s not a bad man, but he makes the boy work for all the things he has purloined.

Hugo also gains a friend in Isabelle (Chloe Grace Moretz), an inquisitive girl who also happens to be Papa George’s goddaughter. The intrepid pair is intent on having an adventure and so they do. The automaton opens them up to the world of Lloyd, Keaton, Chaplin, Fairbanks, and the like. Hugo used to go to the cinema with his father, but he’s incredulous that Isabelle has never seen a movie picture. Her godfather would never allow it, and that’s where the mystery of this film lies. 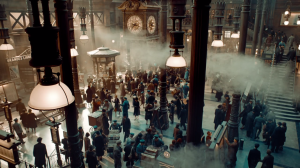 Hugo is a beautifully magical melding of the old with the new –- the mechanical and the visceral. Extravagant colors make Scorsese’s canvas pop. It works together like clockwork.

Asa Butterfield’s charm lies greatly in his piercing blue eyes that have a certain innocence as well as a degree of sadness. Chloe Grace Moretz has a twinkle in her eye and her lips are ripe with elaborate language. Literature and poetry rain from her mouth as someone who finds enlightenment in books just as Hugo finds a special place in movies.

These are children who seek adventure in the everyday, find purpose in the tides of life, and discover magic in the world that surrounds them. That’s what gives life color and vibrancy. It could be Paris circa 1931 or right in your own backyard right now. All that matters is your perspective and donning a pair of new eyes – leading to awe in all things whether big or small, extraordinary or mundane. Looking at the world with the wonderment of a child.

In the redemption of George Melies, we truly do see that out of the ashes and fading strips of celluloid beauty still manage to rise again. This is a beautiful, intimate, and innocent film. In an age when a lot of these things are lacking, it’s a breath of fresh air.