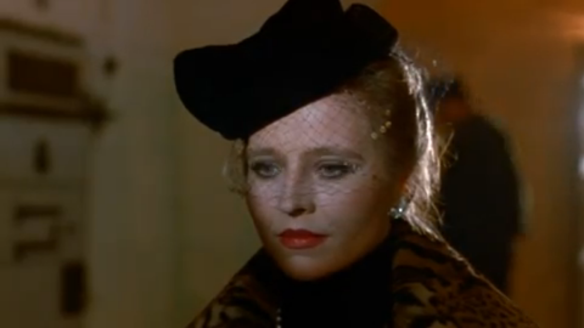 The Marriage of Maria Braun opens with a bang and a thud, literally, as bombs rain down on Germany in the waning hours of WWII. It’s perhaps the most chaotic wedding ceremony ever put to celluloid. And the story ends in an equally theatrical fashion.

But although the beginning and the end do speak volumes, it’s the in between that we must , try and piece together if we ever want to make sense of the eponymous Maria Braun. In all honesty, it’s extremely difficult to know quite what to do with her.

However, to understand her a little context is in order. Germany is in ruins. The allies have swept in victoriously and now the German people must learn how to survive with the new order. Husbands who are as good as dead, black market goods, and scrounging around just to make ends meet.

Maria Braun carries on such an existence to watch over her widowed mother and grandfather who depend greatly on her. She begins working at a bar often frequented by American soldiers and there she meets her first conquest Mr. Bill dancing the night away to “Moonlight Serenade.” Aside from being big and strong, Mr. Bill has resources to support her and there’s a happily symbiotic relationship of romance. Except Hermann returns and he catches the two lovers together. But the strangest thing occurs. In a moment Maria drops all prior activities and rushes to her husband. It seems she still truly loves him, but then what was she doing with this other man?

What follows is the next stage of her life as Maria must play the waiting game as Hermann is relegated to a life in prison. But he is still her husband so she agrees to faithfully wait for him. On a train one afternoon, she bumps into an industrialist named Mr. Oswald. He becomes her next conquest as she first gives him industry advice and then gains a position in his company slowly becoming more affluent. Her spell as Oswald’s mistress begins simultaneously and yet she seems willing enough to be with him, if not for the financial capital to be gained. It’s followed by a strikingly familiar moment of intimacy that looks almost identical to a previous sequence if it were not for the varying skin tones. Maria continues basking in her success.

The fateful day that Hermann returns comes and goes as he informs Maria that he will take a leave to Canada to get his life in order. What she doesn’t know are all the workings behind the scene, not until a major dramatic reveal. Whether you view Maria’s life as success is purely based on point of view. In the audience’s eyes, her story feels quite sad, but we have a feeling Maria never felt that way. She was too strong and self-assured for such a thought.

To its credit, Fassbinder’s drama utilizes language well between German, English, French, and so on with characters dancing between all with a rudimentary skill that helps to paint the post-war canvas with all sorts of dialects. But amidst all the white noise Hanna Schygulla is most obviously the main attraction. What are the words to describe Maria Braun? Provocative, icy, sneering, vindictive, a cynical terror of a woman?

Except, in the beginning, she’s not like this, at least not yet. There are some indications, but they’re only slight signs of what is to come. She uses and abuses but in such a way that her male conquests want to be manipulated. She’s so tantalizing that they don’t mind it in the least.

Could we call Maria a female counterpart to Charles Foster Kane? Yes, except it’s not simply that she’s accrued wealth, power, and influence without love by the end of the film. She has all the love she could ever want. All the attention, all the eyes of any red-blooded man, but she doesn’t seem to know what to do with that love. She compartmentalized her life in such a way where she holds onto her matrimonial bond to Hermann an entire lifetime. When Hermann’s left for dead, when Hermann’s in prison when Hermann takes leave in Canada.

Still, Maria holds onto the fact that she is married to this man she loves, while simultaneously freely being involved with other men. Does she really love him? I think it’s all too probable, and yet she doesn’t know how to function in that singular capacity. These other men hold a purpose in her life. Is it a coincidence that Hermann and Maria barely share any screen time together? It doesn’t seem like it. Not with someone as engaged as Fassbinder. He, like Maria Braun, knew what it was to be loved, but perhaps he did not know what it was to love others in a normal, healthy way without undermining it with his own inner demons. He died back in 1982 of a drug overdose at the ripe young age of 37. His genius was realized, but in the wake of such genius lay innumerable tragedies.