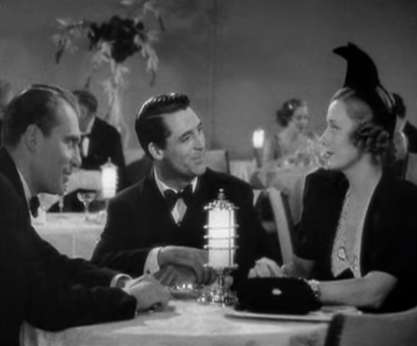 The Awful Truth came out of a trend that was in vogue during the 1930s. It’s called a comedy of “remarriage.” During the Hays Code era, it allowed films to nimbly skirt the whole issue of divorce and extramarital romance. We would see it again in the more remembered screwball His Girl Friday and various other forms as My Favorite Wife and The Lady Eve.

However, when I first saw this film I was floored by its pure comic fun that pushed Cary Grant’s persona into the public eye for the first time and made me consider Irene Dunne one of the most underrated actresses that I can possibly conjure up. I try not to use the Oscars to define the greatness of a film or star, but for her, I’ll break the rule. She got nominated for Best Actress 5 times and never won.  To call her a Jean Arthur-type is rather condescending given both stars’ magnitude, and I will say she easily gives Katharine Hepburn at least a run for Cary Grant’s best romantic partner. She was an unexpected joy of beauty perfectly wed with comedic wit.

I was afraid that with that element of surprise gone the film would lose some of its mystique. True, perhaps it was not as magical this time around, but I will still acknowledge the merit of The Awful Truth as an often under-appreciated gem of a comedy. Director Leo McCarey came into his element in 1937 with this film and Make Way for Tomorrow. They are starkly different pictures, but here he embraces the tension, the awkwardness, and everything else that makes comedy transcendent. And there is hardly anyone more transcendent than Cary Grant.

His smirks, which would be recycled for His Girl Friday and numerous other films, are universal. His adeptness with pratfalls and physical comedy are fully on display, and he simply had smashingly good chemistry with Dunne. Every time they throw a jab and the sparks begin to fly you know how much they care for each other, just like two of Ralph Bellamy’s chickens madly in love. A great deal of their success could undoubtedly be attributed to McCarey who gave them very little actual script to work with and forced them into ad-libbing scenes. The results speak for themselves.

In truth, the film begins quite innocently enough before evolving into an utterly acrimonious divorce proceeding, ending with a bitter fight for their prized pooch Mr. Smith (Asta of Thin Man fame). The second round goes to Grant as he plays third wheel with Lucy’s new air-headed, Texas beau Dan (Ralph Bellamy). He makes a new acquaintance of a southern belle who just happens to be a nightclub singer. Her performance is an awkward affair crossing Gone with the Wind with Marilyn Monroe‘s antics in The Seven Year Itch. We could take or leave her little ditty, but the reactions from our stars are priceless. On top of that, Grant shows his tumbling prowess a couple times, while also having a lark with Mr. Smith in the home of his old love and hiding behind doors at all the inopportune times. Lucy can’t seem to get rid of him and by the end of it all, she doesn’t quite want to.

Round three goes to Dunne as she tries to find a way to weasel her way back into Jerry’s life. He’s about to be wed to a high-brow socialite, but Lucy gets into the mix by masquerading as Jerry’s screwy sister. It’s an inspired bit of ditziness that Dunne plays to a tee, being the remarkable comedienne that she is. Meanwhile, the whole well-to-do family looks on rather stink-eyed, as Grant and Dunne spar back and forth. She’s trying to mess things up, he’s trying to keep all the plates from toppling as he attempts to maintain all his covers stories. It’s fit to be a disaster.

The final act is the most wistful because time is winding down and we know what that means. Jerry and Lucy won’t be married anymore. But they both still love each other, they just won’t say anything for fear that this is a one-way street. Happy endings abound in an old cabin in the woods. There, creaky doors, kitty cats, and cuckoo clocks spell wedding bells. And they go out on top, together again, in one bed. Grant and Dunne remained a phenomenal screen couple for a couple more films, but this original offering from McCarey was undoubtedly their best.