It’s only 40 minutes — hardly a feature film and more of a featurette, but Jean Renoir’s truncated work, A Day in the Country, is nonetheless still worth the time. Admittedly, I still have yet to venture to France and I hope to do that someday soon, but this film propagates marvelous visions of the countryside that resonate with all of us no matter where we hail from. Those quiet jaunts out in nature. Sunny days perfectly suited for a lazy afternoon picnic. Peacefully gliding down the river as men fish on the bank contentedly.

Our little vignette opens at a calm seaside fishing getaway where a group of Parisians journeyed for a little relaxation away from the city limits. Among their ranks are the worldly but personable Monsieur Dufour and his bubbly wife. They are accompanied on the adventure by their pleasant daughter Henriette and the peculiar shop assistant Rodolphe.  Their arrival in the country is full of gaiety and playful interludes reminiscent of the decadently sensuous works of Rococo artists Watteau and Fragonard, most specifically The Swing.

Two young men named Henri and Rodolphe spy the recently arrived female travelers and are immediately intrigued. As veteran fishermen, they’re prepared to set out their bait,  cast their lines, and hook their catches for an afternoon of harmless enough fun. 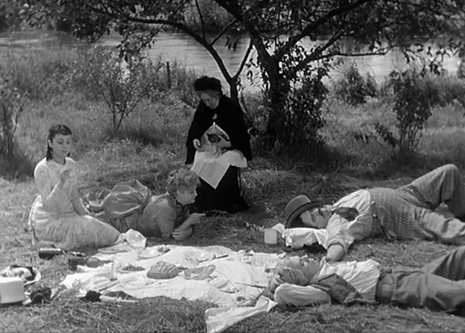 As always these characters set up Renoir’s juxtaposition of luscious extravagance with the earthier lifestyle of the lower classes. However, there is a geniality pulsing through this film, with Mrs. Dufour exclaiming how polite these young men are–they must be of good stock, obviously not tradesmen. Even Mr. Dufour is a good-natured old boy who gets fed up with the elderly grandmother, but he willingly takes the boys charity and advice when it comes to the prime fishing holes.

There is only one point of true drama, in the melodramatic sense of the word, and that’s when Henri takes Henriette to a secluded to observe a bird up in the treetops and proceeds to try and kiss her amorously. It’s a quick sequence, initially met with rebuke and finally accepted in a moment that will leave an indelible mark on both their lives.

It’s the quintessential wistful love that can never be that we’ve seen countless times in film and television series. Time passes and  Henriette comes back with the image of that place and Henri with it, emblazoned on her mind. They reunite, but again, this time, it cannot be either because Henriette is now married. She is spoken for and there’s nothing that Henri can logically do about it. That’s where our tale ends. Certainly, there could have been more, but we don’t necessarily need anything. 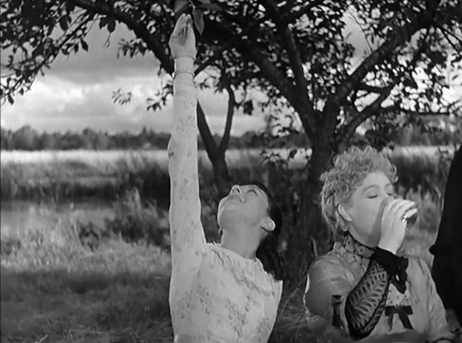 We get the essence of what is there and we can still thoroughly enjoy Renoir’s composition. His is a fascination in naturalistic beauty where he nevertheless stages his narrative to unfold in time. But really this mise-en-scene created by the woods, and meadows, trees, and rivers really function as another character altogether. And when all the players interact it truly not only elicits tremendous joy but an appreciation for Renoir’s so-called Poetic Realism. Whether he’s capturing a woman swinging jubilantly on a swing or framing a shot within the trees, we cannot help but tip our hat to his artistic vision. If his father Auguste was one of the great painters of the impressionist era, then Jean was certainly one of the most prodigious filmmakers of his generation, crafting his own pieces of impressionistic realism. In fact, with father and son, you can see exactly how art forms can overlap on canvas and celluloid. They truly share a fascination in some of the same subjects. Universal things like nature and human figures interacting in the expanses of such environments. It’s beautiful really, even in its pure simplicity.