On only two occasions have I had the pleasure of watching a Jacques Becker film, and I hold him in the highest esteem even based on this admittedly meager sample size. It seems a fitting observation to acknowledge how closely he was tied to one of France’s foremost titans, Jean Renoir, serving as his assistant director on a number of his projects including A Day in The Country and The Grand Illusion.

The overt connections between the so-called poetic realism of Renoir and brethren like Marcel Carne seem intuitive, not merely in visual style and content, but going so far as casting some of the same actors — in this case, a Renoir regular like Jean Gabin.

While completely seamless transitions are hard to come by, it’s not all too difficult to go from Renoir to Becker and see how his work bleeds into the crime pictures of Jean-Pierre Melville and then the Nouvelle Vague and so on and so forth. If nothing else, it is a tangible reminder that all cinematic artifacts find their roots in ancestors. Nothing exists on its own completely outside the undue influence of others. As it should be.

Touchez Pas Au Grisbi, translated to “Hands Off The Loot” in English, rarely gives much pretense of being a crime picture. Sure the people within its interiors are criminal types; it’s easy enough to decipher just watching and listening, but this is a film reminding us how mundane even their lives can be.

If there is anything half resembling a prototypical inciting incident it would be the brief moment when the veteran gangster, Max (Gabin), scans the newspaper to note a cache of gold bars have been stolen in Orly. Nothing is said of it but the implications are obvious, and Becker’s movie is made up of such moments.

The director never telegraphs anything to the audience, remaining content to examine scenes, playing around with seemingly trivial or unimportant details, and letting his story rely on such details for its enjoyment. The trick in the initial scenes is the feeling we are driving toward some inevitable end while Becker is content to coast along. As a Hollywood-bred audience, we wait a bit impatiently for the next beat to rev up the action, but the real game is right in front of us the whole time.

In his own way, Jean Gabin has the weight of a Brando or a Jimmy Cagney. He can be “The Godfather,” and we believe it, and yet there is something amiable dancing in his eyes this time around. Of course, he’s nothing like those other men — never unhinged and always settled in his surroundings — but he brings the same boldness of being.

When he’s in a room with others we want to watch him and see what he will do. There is an instant gravitational pull toward him. He can carry these moments like the greats. It’s not to say he can’t be violent, even brutal. Burning like hot coals at times. Slapping people around. Still, he’s always measured.

Touchez Pas Au Grisbi opens as a series of scenes (like most movies) where we go from a restaurant to a car to a club. Two gangsters, including Max and his cohort Riton, are spending time with their pleasant female company (Jeanne Moreau and Dora Doll) — it’s the customary social life of people in their business — they have to make the rounds and keep up appearances.

We are privy to this as an audience and maybe we are waiting for something to happen in the conventional sense. There’s a conference in a backroom were Max pays his respects to a couple of work associates, one a thuggish gangster Angelo (Lino Ventura), the other a bespectacled nightclub owner Pierrot (Paul Frankeur). In another accompanying sequence, he walks in on Angelo with his partner’s girl Josy. Still, he doesn’t do anything rash. He takes it in stride as Josy defends her decisions. In a movie where a plethora of lovely ladies (including Miss America Marilyn Buferd) exist as eye candy, Moreau manages a few defiant acts of rebellion. 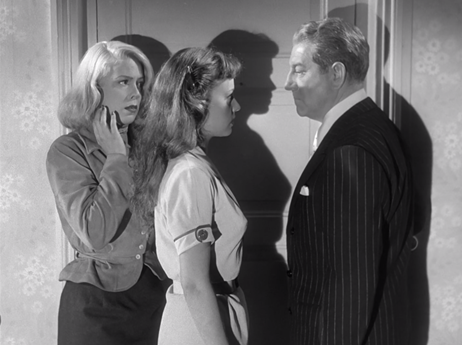 We follow Max home only for him to be tailed by a shady ambulance with two “physicians” looking to take him in. He nonchalantly walks up to his flat, pulls his gun out of a drawer, and wards them off with his piece, darting off into the night to pay a visit to his accomplice Riton (dour-eyed Rene Dary). Call it action if you will, but it’s all a bit discombobulating, never smooth or modulated. This in itself speaks to something. Nothing is written out on a billboard for us. We have to infer and do the work on our own. Becker is content with this arrangement.

Finally, Max and Riton are sitting around a table once again, crunching on food disconsolately. Why are they so bleak? It barely seems as anything has happened to them. Perhaps this is the point. We realize for the first time their discontentment with the life of crime. They are old, at least for such a young man’s racket. They’ve seen it all and as Max says, they’re fed up with it all. More than any amount of danger, it’s a nuisance staying ahead of the pack.

As with any such person, whether thief, gangster, gunslinger, or outlaw, it becomes very difficult to run away from a lifestyle once you’ve been marked by it. The world you initially chose reciprocates by choosing you, and it always has a habit of catching up with you.

For now, they watch and wait. Never before have I witnessed a robber gargling as he gets ready to bed down in his pajamas or later on reaching into the cupboard to pull out the bedclothes. It’s practical, but surely, this is not kosher. Unwritten rules say cinema is life with the boring bits cut out. Becker is brazen enough to make a gangster picture with the dull bits stitched back in. In his own creative patchwork, they inform his characters.

We’ve all but forgotten about their payload. That is until Max pays a visit to his uncle, who also happens to be his shady dumping ground. Haggling over hot money has even lost its luster. It takes all the fun out of having wealth.

Most importantly, we are reminded Max is human. It’s what previous generations — namely the Greeks — would have termed hamartia. This is his fatal flaw. For us, it simply makes him more relatable. He’s a sentimentalist — no longer The Godfather figure. He is fallible. His weakness has been ousted. Surely these themes slowly progressing through the story are not unfamiliar ones about aging and friendship in a dirty business. But they have their own crucial perspective — an individual point of view.

One of the most gripping scenes occurs in a cellar. They’re shoving a young kid down the steps for spying, ready to work him over. He gets a few smacks. In such a banal world it feels all the more terrifying, clamped in our faces with glowing close-ups. There’s little in the form of action up to this point, aside from the film’s fairly explosive climax, as a kidnapping triggers a mini gang war.

Again, Becker appears more interested in the outcomes than the actual events. What is leftover would normally be termed superfluous scenes, but once more, they hold true to the essence of the characters. The ending gives way to these curious moments with Max back around a lunch table with a beautiful woman, on the phone, and hearing some sad news. The melancholy sets in. It all matters. Some might argue there is no movie at all. For me, there’s no movie without Gabin.