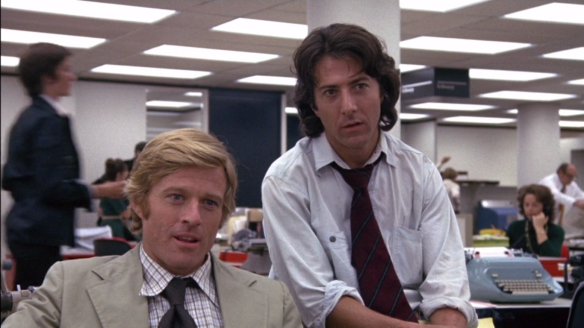 You couldn’t hope to come up with a better story than this. Pure movie fodder if there ever was and the most astounding thing is that it was essentially fact — spawned from a William Goldman script tirelessly culled from testimonials and the eponymous source material. All the President’s Men opens at the Watergate Hotel, where the most cataclysmic scandal of all time begins to split at the seams.

And Bob Woodward (Robert Redford) joined by Carl Bernstein (Dustin Hoffman) were right there ready to pursue the story when nobody else wanted to touch it. The Washington Post went out on a limb when no other paper would. Because if we look at the historical climate, such an event seemed absolutely ludicrous. Richard M. Nixon was the incumbent president. Detente had led to cooled tensions with the Soviets. And Democratic nominee George McGovern looked to be on a self-destructive path.

But the facts remained that these “burglars” had ties to the Republican Party and potentially the White House. It was tasked to Woodward and Bernstein to figure out how far up the trail led. And to their credit the old vets took stock in them — men made compelling by a trio of indelible character actors Martin Balsam, Jack Warden, and Jason Robards.

Woodward begins hitting the phones covering his notepad with shorthand and chicken scratch, a web of names and numbers. With every phone call, it feels like they’re stabbing in the dark, but the facts just don’t line up and their systematic gathering of leads churns up some interesting discoveries. Names like Howard Hunt, Charles Colson, Dardis, Kenneth H. Dahlberg all become pieces in this patchwork quilt of conspiracy. The credo of the film becoming the enigmatic Deep Throat’s advice to “Follow the money” and so they begin canvassing the streets encountering a lot of closed doors, in both the literal and metaphorical sense.

But it only takes a few breakthroughs to make the story stick. The first comes from a reticent bookkeeper (Jane Alexander) and like so many others she’s conflicted, but she’s finally willing to divulge a few valuable pieces of information. And as cryptic as everything is, Woodward and Bernstein use their investigative chops to pick up the pieces.

Treasurer Hugh Sloan (Stephen Collins) stepped down from his post in the committee to re-elect the president based on his conscience, and his disclosures help the pair connect hundreds of thousands of dollars to the second most powerful man in the nation, John Mitchell. That’s the kicker.

It’s hard to forget the political intrigue the first time you see the film. What I didn’t remember was just how open-ended the story feels even with the final epilogue transcribed on the typewriter. The resolution that we expect is not given to us and there’s something innately powerful in that choice.

Gordon Willis’s work behind the camera adds a great amount of depth to crucial scenes most notably when Woodward enters his fateful phone conversation with Kenneth H. Dahlberg. All he’s doing is talking on the telephone, but in a shot rather like an inverse of his famed Godfather opening, Willis uses one long zoom shot — slow and methodical — to highlight the build-up of the sequence. It’s hardly noticeable, but it only helps to heighten the impact.

Furthermore, some dizzying aerial shots floating over the D.C. skyline are paired with Redford and Hoffman’s voice-over as they are canvassing the streets to convey the type of paranoia that we would expect from a Pakula film. Because, much like the Parallax View before it, All the President’s Men holds a wariness towards government, and rightfully so. However, there is a subtext to this story that can easily go unnoticed.

The name Charles Colson is thrown around several times as a special counselor to the president, and Colson like many of his compatriots served a prison sentence. That’s not altogether extraordinary. It’s the fact that Chuck Colson would become a true champion of prison reform in his subsequent years as a born-again Christian, who was completely transformed by his experience in incarceration. And he did something about it starting Prison Fellowship, now present in over 120 countries worldwide.

It reflects something about our nation. When the most corrupt and power-hungry from the highest echelons of society are brought low, there’s still hope for redemption. Yes, our country was forever scarred by the memory of Watergate, but one of the president’s men turned that dark blot into something worth rooting for. It’s exactly the type of ending we want.