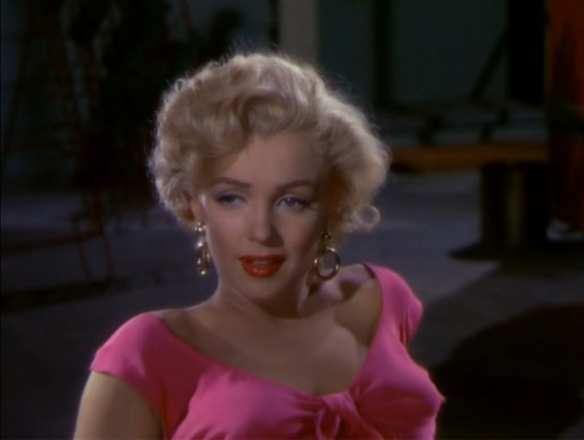 Rainbows, the soft misting of waterfalls, and honeymooning couples going through the tunnel of love. It hardly feels threatening at all, but that’s what makes film-noir so delicious. As the film style most reflective of the human condition, it proves that the dark proclivities and jealousies of the human heart can crop of anywhere–even a gorgeous tourist trap like Niagara Falls.

Niagara’s frames are composed of grandiose and lush imagery, and the film is greatly aided by on location shooting which develops an even more engaging world for this technicolor noir to take place.

Joseph Cotten takes on a menacing role as the tortured husband, his most notable ominous turn since Shadow of a Doubt, however, a tad more sympathetic. Meanwhile, Marilyn Monroe takes a turn as a seductive siren, the other half of this troubled couple spending a weekend at a Niagara Falls Cabin B.

She’s given plenty of screen time to strut her stuff and though early in her career, she would soon enough be catapulted to stardom forevermore with the likes of Gentlemen Prefer Blondes and How to Marry a Millionaire. As they often say, the rest was history and more so than that, she indeed made history.

If you look at her performance as Rose, while not her most enduring, it still catches the eye, due to the way she carries herself–even how she walks down a cobblestone road. You cannot help but be at least moderately mesmerized by her whole image.There was no one before or after, quite like her. She was a singular figure with no true equal.

Without a question, Jean Peters becomes our favorite character as Polly, and it was an eye-opening for me personally to see her in a role so vastly different than Pickup on South Street. I had pigeon-holed her, rather erroneously as such a character, but Niagara shows a more tempered side to her persona that felt more representative of her as an actress. Max Showalter plays her husband, the genial and oblivious Ray Cutler, who takes his lovely wife on a long overdue honeymoon, only to have it totally ravaged thanks to the Loomises.

Henry Hathaway as per usual is a capable filmmaker, who utilizes his stars and location quite well. Charles Brackett builds this conflict between a vacationing husband and wife with his script, but it really is the visuals that elevate it to the heights of a surprisingly compelling noir. The scenes within the catacombs of the falls and at the very edge of the drop off are of particular note–both beautiful and raging in the same instance. The climactic moments between a lurking husband and his fleeing wife in the clock tower are also remarkably stylish, reflecting how a color film can still style drip with noir sentiment.

It’s a film checkered in shadows and bathed in darkness as much as it is rainbows. In some ways, that makes it all the more harrowing. Colors don’t necessarily make everything bright and cheery, they distract from what is really going on, and in this case, the falls prove to be more than an opportune locale for a honeymoon…and murder.