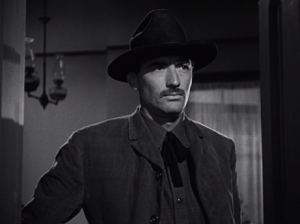 “Ringo don’t look so tough to me.”

Those are the words that propagate a legend and simultaneously follow notorious gunman Jimmy Ringo wherever he goes. There’s always some impetuous kid looking to have it out with him and every time it’s the same result. The kid never listens and Ringo rides off to the next town, wearier than he was the last time.

The Gunfighter has a surprisingly vibrant script with numerous names attached to it at different times including William Bowers, Nunnally Johnson, and Andre de Toth.  It evolves into a sort of chamber piece made into a carnival show when Jimmy Ringo (Gregory Peck) comes to the town of Cayenne.Kids milling about peering in and catcalling as this “murderer” sits in the saloon like a sideshow attraction.

It’s an oddly compelling commentary on celebrity, and in this case, notoriety as everyone far and wide knows the name Jimmy Ringo and is either in awe of it or ready to prove they’ve got the guts to take him down. He’s constantly being sized up, continually being gawked at, or gossipped about. That’s the price of such fame.

But on the opposite side of the coin, and incidentally, the side no one much cares to think about, there’s a jaded man who’s made a life out of gunning down other men and moving from one town to the next to the next. There’s something very human about growing old and that’s what Jimmy Ringo has done. Because as the years march ever onward your whole mindset shifts along with your priorities. A life on the run doesn’t have the same luster. You want to be able to settle down, to be happy, to be at peace. But old vendettas take a long time to die, continuing just as long as the legends that they follow.

Of all men to understand Ringo, you would think that the local Marshall (Millard Mitchell) would be the last, but he happens to be an old friend of the gunman. They used to run in the same circles before Mark softened up. His life mellowed out, while Ringo’s reputation continued to build.

The subsequent sequence in the jailhouse illustrates just how much weight a simple name can carry. When the well-to-do ladies of the town come to the sheriff with their petition for justice, they think little of the stranger who tries to shed a little light on Ringo’s point of view. However, the moment they hear his name uttered, everyone is in a tizzy, rushing out of the jail lickety-split. It reflects just how hypocritical their form of morality is.

The main reason Ringo stays in a town that doesn’t want him is all because of a girl (Helen Westcott). He waits and waits, biding his time, for any word from her, and finally, it comes. He gets his wish to see her and his son in private. These scenes behind closed doors are surprisingly intimate, casting the old gunman in an utterly different light.

Of course, none of that saves him when he walks out that door back into the limelight, living the life of Jimmy Ringo, whether he likes it or not. If the three vengeful brothers don’t get him, there’s someone waiting for him up in a second story window or hiding behind a corner. A man like that can never win in the end.

It struck me that this film has some thematic similarities to another film of the same year, All About Eve. Aside from the fact that I personally enjoy Gregory Peck a great deal more than Bette Davis, both films focus on aging icons. While Ringo is not so much manipulated as undermined by his own legacy, his story ends with a young man much like himself riding off into the distance, to take up the life that Ringo led for so long. The specters of such notoriety will haunt the boy until the day he dies, and much like Eve, the deadly cycle begins again. Henry King made an unprecedented 6 films with Peck and this is probably the hallmark for both of them, certainly their most prolific western respectively.