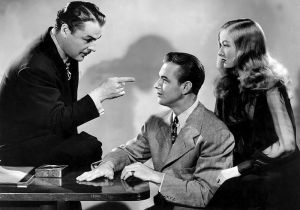 With Dashiell Hammett’s The Maltese Falcon making a splash just the year before and giving a big leg up to its star Humphrey Bogart as well as its director John Huston, it’s no surprise that another such film would be in the works to capitalize on the success. This time it was based on Hammett’s novel The Glass Key and it would actually be a remake of a previous film from the 30s starring George Raft.

But instead, we had Alan Ladd in the lead fresh off a career-making performance the year before. True, Ladd’s no Bogart and the forgotten Stuart Heisler is hardly the caliber of Huston, and still, the film is somehow entertaining in its own way. It channels the political corruption of Force of Evil with a bit of the unfathomable plot and mile-long laundry list of characters rather like The Big Sleep. And once more like any comparison with the Maltese Falcon, it hardly holds a candle to these other films but it’s not trying to be overly smart. It never makes an attempt at commentary or some deep philosophical character study but it does ladle out some unabashed noir entertainment.

There’s the pairing of Ladd and Veronica Lake once more to capitalize on their breakout success in This Gun for Hire. Noir regular Brian Donlevy stars alongside them playing a tough guy and political boss named Paul Madvig. His right-hand man Ed Beaumont (Ladd) stands stalwart by his side until Madwig gets caught up in politics as well a murder accusation. By day he tries to win the hand of the pretty daughter (Lake) of an aspiring governor while at night he looks to run out the towns gangsters namely one Nick Varna. As one might expect murder, corruption and familial turmoil all become integral plot points

Once more Ladd shows his aptitude for playing “leading roles” that still somehow allow him to stand on equal footing beside other stars. His most prominent performance as the gunslinger Shane is a fine example because although he is the title character, still somehow he manages to walk in the periphery and he does so with a quiet confidence. Similarly, in This Gun for Hire and The Glass Key, there is a cool curtness to his demeanor that he pulls off well. It allows him to be the star without really seeming like it. That’s the quality he’s able to cast and Lake works well to balance him out. Donlevy gives a surprisingly spirited performance but he’s not a magnetic star. If anyone, this is Ladd’s film with Lake too.

As we would expect with any decently entertaining noir thriller, the rest of the film is filled out with quite the menagerie of characters the most memorable of those being William Bendix as a rough and tumble henchman. He and Ladd have it out in a couple of scenes and in real life, they would become lifelong friends. The way they beat each other up though it’s sometimes hard to tell.