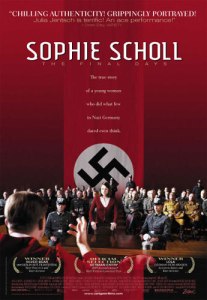 Sophie Scholl: The Final Days is a film that people need to see or at the very least people need to know the story being told. For those who don’t know, Sophie Scholl was a twenty-something college student. That’s not altogether extraordinary. But her circumstances and what she did in the midst of them were remarkable.

It’s easy to assume that life under Nazi authority wouldn’t be so bad for Aryans, nationals, or the general public. But it just takes looking at a story like Sophie Scholl’s and her older brother Hans and that assumption quickly falls apart. Because their lives reflect an alternative to the master narrative, the kind of counter example that is often visible if you look hard enough.

You see, these two young people in solidarity with numerous others took a stand against the oppressive Nazi regime calling for passive resistance, the cessation of violence, and championing the ultimate worth of all people–even Jews and the disabled.

That was a radical departure and utter blasphemy in the face of the stringent rhetoric of the Nazi party. But so were the heady words that The White Rose movement was circulating in those incredibly perilous, heavily policed and censored days and they knew full well the risks that they were taking. Yet they did it anyway, typing up hundreds of anti-Nazi pamphlets to be mailed and further distributed across their university campus.

The film takes a very direct approach to its narrative spending little to no time in building up its character’s backstory instead, throwing us headlong into their business with the printing and dissemination of their message. The film is immediately filled with a palpable tension but it does make you question where the film can go from here as it manages to reach such an unnerving state early on.

In truth, The Final Days spends most of its time in interrogation rooms and prison cells. It’s a stripped down storyline that nevertheless rings with truth and exudes an unassailable depth that says something of the characters at its core. They are remarkable human beings. Bold, brave, resilient, all those things, and yet they were only a group of young college students. Here is a woman younger than me who under tremendous duress and pressure of an astronomical nature, nevertheless showed tremendous poise, resolve, and true strength of character.

Julia Jentsch gives a phenomenal performance as the eponymous heroine in both its composure and restrained strength, never faltering and very rarely succumbing to any amount of emotion until the final moments. And even then she maintains a resolute spirit that seems content even unto death.  Some people are born older and so it seems with Sophie Scholl. Thus, let no one look down on you because you are young because if Sophie’s life is any indication at all you can do so much with this life even in youth.

But the film also becomes a bit of an ideological battle as Sophie spends hour after hour being grilled, belittled, and berated by Gestapo Investigator Robert Mohr. Initially, it all starts with an attempt of catching Scholl in her lie and yet she’s so self-assured in her answers, it’s very difficult to trip her up. And even when they get beyond the beginning hurdles of interrogation they duel on deeper topics altogether from law to freedom of speech, to spirituality.

In her prison cell, when she’s not conversing with her fellow prisoner, Sophie prays to God as she puts it, “stammering to him” but she also holds unswervingly to her faith, maintaining an undeniable reverence for her God and a firm belief that every individual is made in the image of God. That she too is made in his image. Therefore no one has any right to pass divine judgment or dictate whether someone lives or dies. Certainly, the Nazis are no different.

In one striking discourse, Mohr grills Sophie with the following question, “Why do you risk so much for false ideas?” She answers matter of factly. It’s because of her conscious and going further still it’s because every life is precious. A 21-year-old girl was able to grasp what the Nazis were too poisoned, narrow-minded, and proud to see. The inherent worth found in every human being.

That’s why the court scene in Sophie Scholl will incense most viewers and it should. The man who presides over the show trial is a vindictive man seething with indignation against these insignificant, worthless traitors as he sees them. But he’s so utterly blinded. He has no legitimate right to pass any sort of judgment on them. They are so much more honorable than he could ever be. And yet he holds the ultimate authority in this regime and they do not.

To the very end, The Final Days proved to be one of the most taxing films I have watched in some time but even in its endings, it finds hope and stories worth telling. That in itself makes it a wonderful film to discover.

Note: This post was originally written on February 28th and scheduled to be released next month but it seemed like a story necessary for this particular point in time.