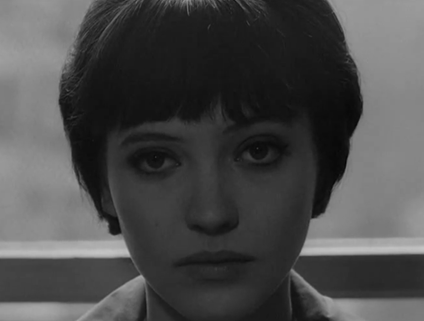 The opening credits of Vivre sa Vie commence with the opening note “dedicated to B-movies” and indeed many of Jean-Luc Godard’s best films could make the same claim. They’re smalltime stories about little people living rather pathetic lives if you wish to be brutally honest. This isn’t Hollywood.

Opening titles aside, we meet our main characters from behind, their backs to the camera in the throes of a minor spat. It acts as the subject for the first of the director’s 12 tableaux that make up the film rather like chapters in a book following the life of our heroine Nana (Anna Karina). Next, comes pinball games, Nana’s occupation as a Record Shop attendant and other mundane moments.

The passage of time caused me to forget that Nana goes to a screening of The Passion of Joan of Arc. Her own life witnessed in the eyes of Joan–a heroine that she easily empathizes with for her own amount of suffering and pain. It’s difficult to decipher who Nana feels more connected to, Joan of Arc or the actress Maria Falconetti herself. Because the truth is, Nana too was trying to make it as an actress, even being featured in a film or a play or something or other. It didn’t work out.

As the story evolves, we gradually begin to see her plight more clearly. It comes slowly at first before fully establishing itself. She goes down the rabbit whole quite by chance, taking on a very different occupation. It’s pitiful really, she looks more like a frightened rabbit than a woman of the street.

Her aspirations of catching the eye of some director are instead channeled towards Raoul, the pimp who gets her started and shows her the ropes of the trade. In some ways, it feels like he owns her, and yet Nana still strives to lead her own life. One of the moments she gives the illusion of happiness is in all places a pool hall as the jukebox grooves away and she shimmies with it. But in this moment as with so many others, it seems as if she’s constantly under the gaze of men. She’s constantly trying to earn their affection and in some sense earn her own worth. Whether or not they give it is another matter and that’s the great tragedy of Nana’s life.

In some of the film’s final interludes, she finds time to wax philosophical with an old thinker on a number of topics from personal responsibility to issues of free will. He further asserts that the more one talks, the less the words mean. Perhaps Godard took that to mean form over dialogue.

At times it’s as if Godard’s camera is constantly on a swiveling axis or even a pendulum, focusing on a figure and swinging back and forth between it’s two subjects. No cuts are necessary and it’s oddly compelling.

Look at his work hastily here and it could be misinterpreted as shoddy and that could be but more likely is the fact that Godard was always thumbing his nose at convention. He was never beholden to classical Hollywood but he did have heroes. The likes of Sam Fuller, Fritz Lang, and Nicholas Ray. Men with their own aesthetics and Godard was forging his own path. Only someone like Godard would have the audacity of having us watch the entire transcription of a letter. Why? Because he wanted to.

Vivre sa Vie did not ignite the Nouvelle Vague but in many ways, it stoked the flames and Godard perhaps unwittingly gave nod to another landmark film from his compatriot Francois Truffaut, Jules et Jim, which finds its way up on a movie marquee.

Perhaps what’s easiest to take away from Godard’s work here with longtime collaborator Raoul Coutard is that he’s constantly messing with our classical cinematic sensibilities. The way he cuts (or doesn’t), the way he interrupts sound, the way he moves between intertitles and so on. It’s still his and it still disrupts the status quo that we are used to even as seasoned viewers of visual content.

For some, it can come off as tiresome, even pretentious but it’s undoubtedly Godard and highlighting the entire narrative is the quietly yet still evocative performance of Anna Karina. Her doe eyes speak volumes by themselves.  They truly were the power couple of the French New Wave. He being the audacious artist, she his inspired muse. However, it begs the question, if there is any stock in the parallelism between film and reality. Nana/Anna being controlled by the men in her life or was it truly her life to live?