This is terribly delayed but I would be remiss if I didn’t submit an entry to this year’s addition of THE REEL INFATUATION BLOGATHON. Without further ado…

I’ve only seen Allene Roberts in one film and she’s hardly even the star of the picture. That privilege goes to Edward G. Robinson as the matriarch of a family with a secret. Still, from the first moment I saw her in The Red House (1947), I couldn’t help but be taken with her persona on screen — that of the daughter Meg — because it feels so very genuine. Infatuation is too strong a word. But nevertheless, being young I was taken with her doleful innocence. That’s as best as I can describe it.

In his contemporary review for the film Philip K. Scheuer paid her the ultimate compliment in The Los Angeles Times, “Allene Roberts appears to be a real find-winsome like Teresa Wright, and with an appealing loneliness.”

To watch the film is to know exactly what he means. It’s no surprise that Teresa Wright is one of my favorite actresses. They share that same girl-next-door charm that’s quintessentially indicative of the war years. It exudes Americana. And yet when I look at Allene Roberts the first name that came to mind — the person she reminded me of the most — was Wright’s costar from The Best Years of Our Lives (1946), Cathy O’Donnell.

There’s an inherent warmth and a naivete that they seem almost incapable of shedding. It’s just a part of who they are. They can’t help but be any other way. Roberts, on her part, is so youthful and innocent and yet look into her eyes in quieter moments and you see a pensive moroseness that comes to the fore.

As Meg, she cares deeply for family and cultivates those relationships through love and loyalty. The boy she admires is equally calm in temperament (played by Lon MacAllister) and they look to be a match made in heaven. Though he admittedly already has a girl, the sultry Julie London who provides the complete antithesis to Robert’s angelic demeanor. It’s a very purposeful juxtaposition that makes each characterization all the more striking.

Because though The Red House is ultimately a film about a buried family secret, it’s most fascinating for the at times curious character dynamics that it displays as well as moody atmospherics. It’s impossible to pull away from the screen not because of the mystery but due to the individuals brought to the screen. They intrigue us. Not the least among them being this girl.

Allene Roberts was only about 17 years old when she came to the screen and she was just about as humble as one might be while still winding up in Hollywood. She was heavily active in her church back in Alabama and lived a generally happy childhood although her father passed away when she was young.

Look over her life and hear bits and pieces of her own account in the wonderful interview from Films of The Golden Age and you are inundated by a story that feels so warm and genuine. There was no drama, scandal, or deep-seated regret, only a life of contentment, nostalgic reminisces, and a refreshing ordinariness.

As she is still with us today, it’s a charming discovery to read some of her recollections from those Golden Years of Hollywood including encounters with Bette Davis and James Cagney (though she didn’t like him too much). However, she was very fond of Robinson for how he treated her in The Red House. She recalls,

“I was working with one of the biggest stars in history, Edward G. Robinson, and I remember my first scene was with him and it was on location on a farm about halfway up California, near San Francisco-somewhere up there… I was terribly nervous. I was seventeen. So we talked and laughed. You know, it just felt like he was somebody I had known forever. Our first scene was in that barn where I asked him to hire Lon McCallister to come and help him in the afternoons. He always played the bad guy in most every picture he did, but he was anything but bad. He was the sweetest person to work with. I just really loved him.” 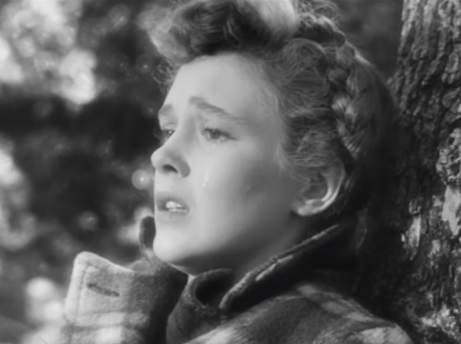 Furthermore, of her director Delmer Daves she remembers the following,

“I had a scene where I had to cry and when we were through shooting, I looked at him and tears were rolling down his face. He was touched by the scene and that really thrilled me that I made that kind of impression on him. He was very sweet to everybody.”

But the beauty of Roberts’ life is that even though her career never bloomed to the heights of a Teresa Wright and didn’t even feature many high profile pictures like Cathy O’Donnell who was closely related to William Wyler, she nevertheless led a pleasant life. She met a charming man whom she dearly loved and left the screen behind for good.

Still, to discover her again in The Red House feels like something uniquely special. It only takes one performance for the viewer to be affected and to want to know more about someone. Because for me Allene Rogers seem so real and genuine in a way that was so very unmanufactured or manicured. We often think of Classic Hollywood making stars like a factory churning out commodities. Changing their names. Giving them certain hairstyles or looks. Stirring up the news columns about them. It’s refreshing to find someone like Roberts who comes off so charmingly normal. She was able to live a life away from the gossip columns and scandals that seem all too prevalent.

I dearly hope she is still doing well and I thank her immensely for her showing in The Red House. The magic of the movies is we can continually be spellbound by her work all these years later. Truly remarkable.

8 thoughts on “Allene Roberts in The Red House”