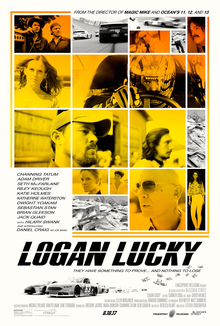 On a surface level, Logan Lucky is diverting for the basic fact that it proves to be the utter antithesis of Steven Soderbergh’s Ocean films as far as heist pictures go. As one savvy newscaster notes within the film, it’s Oceans Seven-Eleven, if you will.

Sure, the novelty of a red-neck heist is probably enough to get us started but the execution and the characters of interest make it far more than a run-of-the-mill endeavor.

What’s evident is that there’s a quirky down-home absurdity to seeing these country bumpkin types filled by actors like Channing Tatum, Adam Driver, and especially Daniel Craig. Adam Driver’s not necessarily a classically handsome performer but he’s even more unique armed with a fake appendage and a fairly free and easy personality.

Tatum likewise is a miner saddled with a hard hat and a limp of his own. He’s a fairly sorry individual who gets laid off from work and has been estranged from his former wife for some time. The glory days as a high school quarterback with NFL aspirations didn’t really pan out. Still, he loves his daughter, loves himself some John Denver, and cares about his family. We can buy into liking such a figure.

Because even in their less than perfect life, an everyday dignity is attributed to both Logan brothers that feels relatable in human terms.  Even with these characterizations and as breezy as the scenario might seem at times, there’s still a kernel of truth buried under it all.

After being equated with Bond for so many years, there’s also this underlying sense that Craig relishes this opportunity to play such a weirdo as Joe Bang, a prison inmate with a penchant for salted eggs. His southern twang and bleached hair mask Craig’s usual British sentiments while his rap sheet leaves little doubt that he’s the man to help pull off the job, supremely capable of concocting homemade bombs out of gummy bears, salt substitutes, and bleach wrapped in a plastic bag.

Of course, the only problem is that he’s still in prison. Nothing for it but to break him out. Clyde gets himself sent to prison and starts their plan in motion. He and Joe orchestrate the perfect escape while the inmates cover for them by instigating a riot.

Meanwhile, on the outside, Jimmy gathers the talents of his sister Mellie behind the wheel (Riley Keough) and Bang’s two cockeyed yet surprisingly competent brothers (Brian Gleeson and Jack Quaid) to bring all the pieces together in a remarkably efficient operation organized on meager means.

However, somehow, through it all, there manages to be that continued dose of humanity on display and an uncertain amount of depth to our everyday antiheroes. Look no further than the former flame and physician assistant that Jimmy sends a donation to or his joy in seeing his little girl go off script and sing his favorite song at her beauty pageant. You aren’t going to find those scenes in Oceans Eleven (2001) or Baby Driver (2017) for that matter.

But the payoff is the kind of double-take ending that makes us rethink the events we have witnessed, suggesting that things are not always as they appear. Still more satisfying than any of that is that Jimmy still has his family and there’s this sense of closure to it all. We can sit back with a smile on our face and really take a moment to appreciate all that has transpired. No better place to end up than the old watering hole Duck Tape. Classic.

One of the film’s major pluses is the number of characters who just randomly seem to pop up within its frames. Foremost among them is Hilary Swank as a government investigator, an almost unrecognizable Seth Macfarlane as a batty racing promoter, and Sebastian Stan as his health-conscious driver. Fans of The Office and Parks and Recreation will also see a couple strangely familiar faces.

By my own admission, I have never considered Steven Soderbergh in the upper echelon of filmmakers but there’s no disputing his station as a skilled craftsman and Logan Lucky proves once more that he knows how to assemble efficient entertainment of quality and levity. Expect both in this much-appreciated riff off your typical sleek heist confections.

It’s perfectly fit for laid-back blue-collar, NASCAR-cheering, John Denver-loving Americans.  The kind of people who know full well that some days are diamonds and some days are stone. Logan Lucky is a crime film carrying that kind of sentiment.