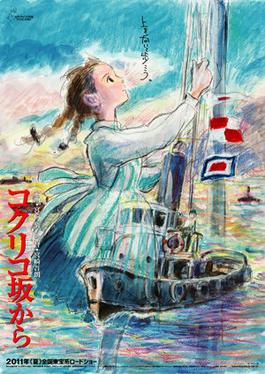 The song “Sukiyaki” sung by Kyu Sakamoto proved such a charming enigma for me. Here was a record that was so quintessentially Japanese, a melodious ballad, that was nevertheless branded in the West with a more novel title and became a smash hit. However, here within the framework of this anime, the song feels perfectly at home once more as “Ue o Muite Arukō” an impeccable benchmark of an era in Japan’s history. It’s true that the full extent of the musical score is noticeably more western than we might be used to with anime yet the cornerstone of the soundtrack is Sakamoto’s iconic tune.

What we are given by director Goro Miyazaki and a script by his father Hayao Miyazaki is a small-scale nostalgia piece that still manages to have broader implications for all of Japan. More crucial yet is how it aims to hone in on a story that is part family melodrama, part love story, and even a high school feel-good tale.

We are planted in Yokohama (south of Tokyo), circa 1963, with the nation setting its sights on the 1964 Olympics famously documented in films such as Kon Ichikawa’s official documentary and Walk Don’t Run (1966). Here Up From Poppy Hill gives a more up close and personal approach that allows us to empathize with a very different type of narrative.

Because even with the pull for modernity feeling so prevalent, there is this sense that Japan, as not only a nation but a culture, must not forget the past. Yes, the war years were rife with so many tragedies but therein still lie traditions and the ways of old that must not be forgotten.

The greatest emblem within the confines of the film is the so-called “Latin Quarter” on the high school campus — a dingy rickety old building that serves as headquarters for many of the school’s circles including philosophy, chemistry, archaeology, and of course, the school newspaper.

Umi is a young student who must help run her family’s boarding house by preparing meals daily after school and the like. But after a fateful encounter, she is drawn to become a member of the academy’s journalism circle transcribing news.

One of the figures who leaves an impression on her is Shun, a stalwart member of the journalism circle, who is part of a band of students intent on fixing up their headquarters. But more so than that these audacious students must plead with the local chairman to reverse his plans to demolish the old relic. For them the reasons are twofold. First off, it’s their home and secondly, it’s part of their history.

Poppy Hill also takes great care to consider Umi and Shun’s parents. Her mother is a professor and her father was a sailor who died during the Korean War. Shun’s past is something that’s even more murky, clouded by facts that he’s never quite been able to reconcile. Their coming together at school proves a near act of fate since their personal histories are tied closer than they could have ever known. Again, the past and the present prove equally important to their identity.

The main draw for me is the throes of nostalgia that wrap up the picture. Pictorials that capture the innate beauty of living in Japan generations before with the harbor and the fresh sea air off in the distance. While simultaneously you have the degradation left over from the war and the increasing pollutants which come with what is termed “progress.” It’s true that in all things there can be derived both a positive and a negative. The same could be said of the love/hate relationship with the U.S. and the constant give and take between progress and remembering the past. These issues prove universally applicable.

But this is never a story to dwell on the bad, far more content with forging an innocent and genial path. That’s one of its finest attributes and you can see Hayao Miyazaki’s own warmth coming up through the seams. There is little animosity here as it’s replaced by laughter and more pleasant aspirations. While son might never reach the heights of his father as a storyteller, Up From Poppy Hill is nevertheless a quaint tale that brims with benevolence.