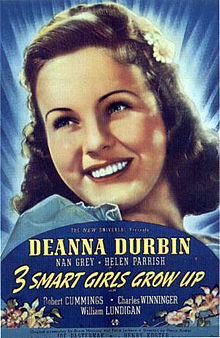 The Universal dream team of Deanna Durbin, producer Joe Pasternak, and director Henry Koster are back at it again in this follow up to the wildly popular comedy that propelled Durbin to international stardom.

The Craig sisters are back too and this one begins with a unique and rather hilarious opening title sequence as our three girls now grown up, as the title suggests, prepare their salutations for meeting the governor.

Most things haven’t changed as Penny (Durbin) is precocious as ever. The family seems joyous given the previous film reunited their estranged parents once more. But for some reason, it seems the men they were engaged to didn’t remain (conveniently for the sake of the sequel).

So the film proposes another slightly maudlin very straightforward problem that Penny puts it upon herself to solve: Her big sister is in love with one man, the young man who is just recently engaged to be married to their other sister. There’s nothing for it but to find another man who will be a distraction. Never one to be outwitted, Penny introduces an eligible man into the equation, an older musician (Robert Cummings) from the conservatory she practices at under her teacher (Felix Bressart).  But her concerned parents get the wrong idea with her bringing an older man around the house for dinner.

They forbid their daughter from going to her music lessons now. By the time she figures out what has happened, the fateful day of the wedding is almost upon them and so she does the only thing she can think of — go to her father — the same father who has been drowning in work as of late. Like any good father, he comes in clutch when it counts. The happy ending kept fully intact.

Ironically, Robert Cummings makes a passing remark about how he has no girlfriend and he’s waiting for Penny to grow up. Funny because he and Durbin would be paired in It Started With Eve (1941) just two years later as romantic interests.

Durban, on her part, was christened “Little Miss Fix-It” for these roles and though she was beloved for such fare there’s no begrudging her for wanting more meatier and mature parts. By and large, she wasn’t all that successful in getting the type of roles she wanted and it led to her retirement from acting in 1949. She would never make another picture after that and proceeded to live a life of relative seclusion with her husband in France.

It’s easy in this specific instance to make parallels with Greta Garbo’s own trajectory from top of the world to self-prescribed anonymity.  Except Durbin did it at an even younger age. There’s no overstating her importance to an entire generation of filmgoers. There’s no greater compliment than the attributed fact that Winston Churchill so loved Durbin’s films he would play them following British victories during the war years. She certainly does give you something to stand up and cheer about with her voice and a sparkling countenance alone.