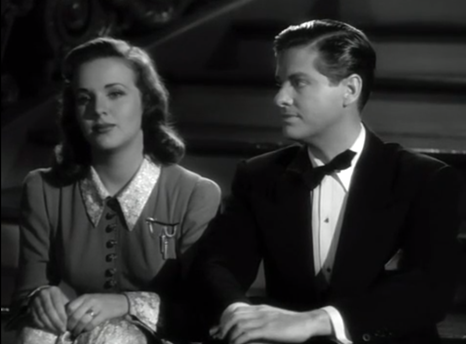 We enter a newsroom that feels like it could be ripped out of His Girl Friday (1940). The editor is lining up his copy for the following day with a big front-page spread on the renowned millionaire Jonathan Reynolds (Charles Laughton). They just need him to die and they can print it.

Of course, at this point, it looks like it’s all but in the books. He’s a very sick man, on his deathbed, straining at what look to be his final gasps of air. His son (Robert Cummings) is rushing away from his vacation to be at his father’s side before it’s too late. The doctor fears the worst but his son makes it back from Mexico City in time to catch his father.

They share some tearful exchanges. Then, comes the fateful moment where his dad asks to meet his new fiancee. Wanting to honor his father’s last wish, Johnny goes pell-mell to his fiancee’s hotel but she can’t be found anywhere and he tries everything.

In a frantic moment of duress, the man makes a decision that will forever alter the course of his life. A hatcheck girl at the hotel (Deanna Durbin) becomes the perfect stand-in for his fiancee on a dime.

Frantic, he promises her 50 bucks and takes her to his father’s bedside. They share a poignant exchange and Johnny thanks her for her services and thinks that is the end of it — of his father and his relationship with this woman — but he’s terribly mistaken on both accounts.

Against all medical opinions of the family doctor (Walter Catlett), Mr. Reynolds makes a miraculous recovery and is back to his old ways craving cigars and steak for breakfast. It’s joyous news until he wants to have breakfast with Gloria Pennington whose actual name is Anne Terry.

Now his son is in a jam and he pulls Anne away from her train to Ohio to keep his father happy by maintaining the charade. Now he’s in deeper than he wants with one “fiancee” hitting it off with his father and the other with her mother waiting to be introduced to Mr. Reynolds. Needless to say, the local bishop (Guy Kibbee) gets the wrong idea about the boy he has known from youth who has become a degenerate philanderer supposedly keeping company with two different women.

Johnny could care less. He’s still in a bind and his main goal is to get everything patched up by paying off this girl again and enlisting the help of the doctor to introduce his fiancee into their home very naturally before the big party his father is throwing. It’s easy enough to tell his father that they have a lover’s quarrel and the “engagement” is off.

And yet, Anne doesn’t let it go that easily and she returns to profess the error in her ways and make up. Because now she has a larger stake in this new relationship. She’s a struggling musician who has heaps of talent. It’s just that she’s never gotten a chance to share it with someone important. This is her one shot at a big break. But far from being an opportunistic girl, she also adores this man and to some extent likes his son for a certain amount of sensitivity that he has.

Durbin and Laughton are brilliant fun together because he remains the crazy glue that holds this “romance” together. While things look like they have run their course and Johnny has salvaged everything the way they were originally meant to be, Mr. Reynolds goes off script and does the unanticipated, he drops everything at his gathering to see Ms. Terry.

But of course, we already know they aren’t a real couple and so it makes for an initially awkward and then a surprisingly jovial evening, finished off with a lively round of the conga. Mr. Reynolds succeeds in almost giving his good doctor a heart attack and sends his son for a real loop. In another fit of Deja Vu, Johnny races after Anne’s departing train to catch up with her once more. This time for good.

Charles Laughton is undoubtedly the M.V.P. of the picture providing a delightfully grouchy yet lovable turn hidden behind a mustache and a happy old boy persona which channels a bit of a naughty schoolboy at that.

Cummings has a knack for the clumsy, flustered comedy that comes as a result of his initial bumblings. He and Durbin work through the hilarious miscommunications that ensue beautifully as standard procedure in such a screwball musical. Instead of kissing like normal people they giggle, cackle, pinch, bite and do about everything else including play fight around the interior study. But if that isn’t love then I don’t know what is.