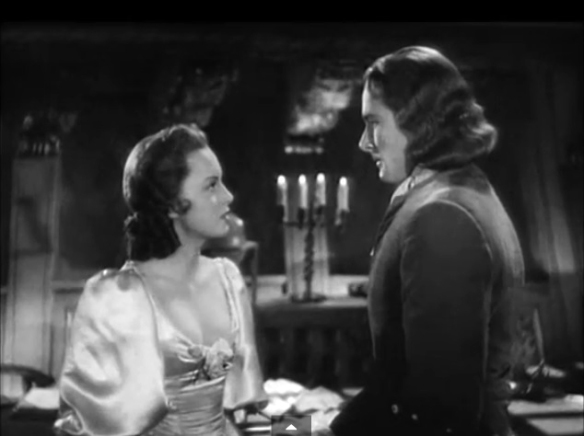 To a certain stratum of society — namely classic movie fans — it’s nearly impossible to imagine Errol Flynn and Olivia de Havilland not being paired together or not being box office draws, for that matter. However, on both accounts, in 1935, the studio was taking quite the risk, still undoubtedly reeling from the heart of the Depression Years and shelling a hefty sum of money for a vehicle essentially starring two unknowns.

Sometimes you catch lightning in a bottle, and it remains for all posterity. Scoring, again and again, is quite another matter entirely. The pair would be placed together in an astounding 8 films in total!

This initial entry opens in England in 1685 and a band of patriotic rebels has taken it upon themselves to depose the current tyrant James II. Though he chooses to forego involving himself in the fighting, physician Peter Blood nevertheless goes with them in spirit and is ready and willing to operate on a fugitive who is mortally wounded. However, in the process of attending to the man, the king’s guards burst in upon him and all involved are arrested.

Their future is decided in a trial of pomp, circumstance, and unyielding justice. There are few figures in the legions of contenders as charismatic as Errol Flynn, beginning with his attempt to exonerate himself and extol his own noble profession. Even that fails to keep him from the executioner though the king fancies himself a humanitarian and decides to send the lot of traitors on slave ships to the West Indies instead.

There is a blatant irony in the depictions of white slavery while the deep wounds of black slavery were still being felt in our country through the oppression of Jim Crow Laws and racial injustice. This continues on the island plantation prison where the lads find themselves.

There they are sold on the auction blocks like chattel though much to his shame, Blood finds himself indebted to a pretty matron Arabella Bishop (Olivia De Havilland) who bought him for 10 pounds. Their relationship begins on the rockiest of soil and life thereafter is hard. Though eventually, Dr. Blood gains favor when he cures the hissy hypochondriac governor of his gout, earning himself greater freedom.

And with that the good doctor bides his time, planning an escape to coincide with a timely interruption on the outpost by Spanish Pirates. In the drunken escapades that follow, Blood gathers his men together, switching places with the invaders and a new band of pirates is born. They are a hardy lot including Blood’s faithful pilot and friend Jeremy Pitt (Ross Alexander), the sturdy gunner Hagthorpe (Guy Kibbee), and one Bible-spouting mate who has a bit of scripture for every occasion (And then the whale came and the whale swallowed Jonah. I hope!).

Their acclaim grows to such an extent that they fall into the company of a band of French Buccaneers led by a salty lady’s man named Levasseur (Basil Rathbone). He and Blood draw up a loose pact which quickly falls apart as they quarrel and end up dueling for the company of their esteemed “guest” Ms. Bishop. Laguna Beach, California ends up filling in for the Caribbean as they have it out in stirring fashion. Flynn and Rathbone were the best of foes when it came to crossing swords, even when they were purportedly allies.

In the final act, the outlaws are redeemed (like Robin Hood anyone?) taking up the banner of the new king William of Orange to fight a valorous battle for the glory of Merry Ol’ England. Thus, in spite of the tumultuous path he traversed, Captain Blood and his boys reach the pinnacle. He’s a hero and, of course, he gets the girl. There’s nothing her indignant uncle can do about it now as he’s been replaced by a far more benevolent governor.

I would be remiss if I didn’t ruefully admit how much I yearn for the epic swashbucklers of old. Captain Blood was the beginning of great successes to come and the type of Hollywood entertainment that is sorely missed today.

Although I hardly can remember their lips even touching, nevertheless, Flynn and de Havilland are fire together, all but cementing a screen partnership that would continue for many more. Even in the final scene together what becomes apparent is this genuinely contagious brand of fun. If anything they make it seem like a blast for the audience.

There’s a splendidly pulsating finale at sea where it’s convenient enough to cast inconsistencies overboard and instead be overwhelmed by the sheer mayhem of 2500 extras called on to do battle and make a show of it. They take to it handily clashing their cudgels, swinging from the yardarms, and falling into the drink, casualties of pistol fire.

Captain Blood is blessed with laughter as much as action and romance. The tenets of quality adventure filmmaking mean the picture enthralls us as much today as in its day because it knows what it means to have a good time. The seriousness can be shed for the sake of light-hearted, invigorating, no holds barred entertainment.

Because in the assured hands of Michael Curtiz, with a dashing new screen idol in Errol Flynn, Captain Blood never loses sight of what makes movies communal and thoroughly gratifying. Movies of old had a habit of being all things to all people, and it’s true this one has it all, I’m delighted to say.

The final testament is a smile imprinted on the face of the viewer as big as Flynn’s jaunty grin. Oh, what we wouldn’t give to be on the deck of that ship brandishing our cutlass and romancing a pretty young maiden just like he does. Maybe that’s my boyhood imagination speaking, but he really is the ideal action hero.