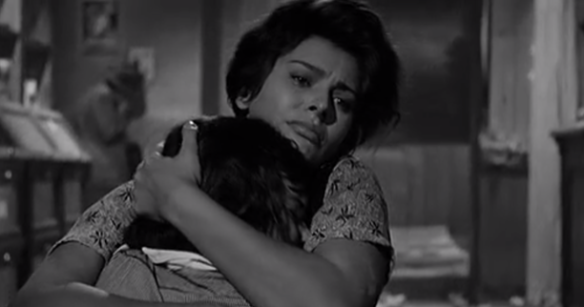 Sophia Loren is an extraordinary treasure of the cinema. We know her from numerous Hollywood pictures but there’s something especially gratifying about hearing her in her mother tongue. It’s not that she is necessarily less herself in a picture like Houseboat, speaking English dialogue, but we can take it in the opposite way.

Seeing her in a film like this, with such a reputable director like Vittorio De Sica, in her native Italy, adeptly pulls us into the searing drama. It feels like we are seeing more of her. Because the beauty of emotions through cinema is the very fact they can speak to anyone from any nation, regardless of time or place. So it is with Two Women.

Though quite young to play a mother, Loren is, nevertheless, more than up to the task, emotionally exuding a fierce maternal strength in the face of everything. She’s not afraid about calling out certain men as pigs for their leering ways and forward behavior.  In fact, it seems highly prevalent behavior, troubling as it is to admit. Along the road, the relationship between mother and daughter is paramount and it evolves as they are burnished together. Eleanora Brown is only 11 years of age and yet she too, like her onscreen mother, is endowed with a maturity, a presence, far beyond her years. They carry the screen together.

However, Vittorio De Sica’s film is simultaneously a portrait of Italy during the war with Cesira (Loren) trying to eke by a living with her daughter Rosetta, away from Rome. They make the trek to the countryside to escape the destructive onslaught of Allied bombs. We begin to see war with a human face where goodness is maintained in the face of evil. For instance, she relents and gives aid to two stranded Englishmen, sharing a meal and a bottle of wine together cordially. They reciprocate some of the hospitality that has been extended to them by local families.

From all I know of Jean-Paul Belmondo as an unorthodox anti-hero for Godard and Melville, he seems somehow miscast for this role, completely disregarding the fact he’s not Italian. His Michelle is an enlightened man of intellect denoted by spectacles. He welcomes the change coming in the waning days of war and rebukes the people for being more dead than Lazarus. Not even Jesus Christ can resuscitate them he says. It seems a harsh indictment.

We can also hear Cesira counting sins and trying to decipher how children fit into the insanity of war. Because there’s little doubt war is exactly that. Planes continually dropping bombs from the skies overhead. Emaciated German soldiers demanding food at gunpoint and a hostage guide to lead them toward freedom. Finally, American forces move in with their liberation party riding in on their tanks and the mood lifts.

Thus, it’s a war film with soldiers of all different stripes and allegiances, but vastly more importantly it regards the lives of the laypeople and folks affected by the outcomes of such a global conflict. It is their homes and their families that are torn asunder. Their bodies are in need of nourishment. They are the ones in constant danger of becoming collateral damage.

It’s a disheartening form of whiplash sending us into so many conflicting fits of emotion. From the highest elation down to the mundane and finally heightened senses of fear and suffering. Humans should not be subjected to such extremes. 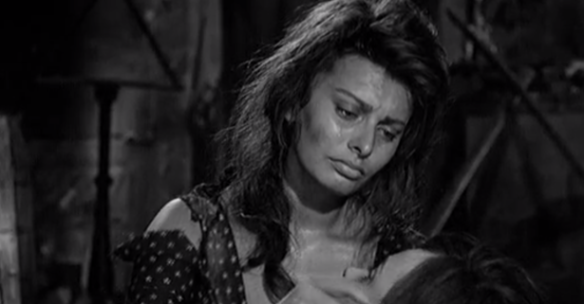 Then, comes the scene you hear whispers of when anyone mentions Two Women and it’s true there is certainly a “before” and “after” effect from such a life-altering experience. All we can do is look on helplessly as the two travelers are overpowered by soldiers looking on lecherously, almost giddy with delight. The rest we understand implicitly. In the moment, it almost feels comical and ghoulish; it’s bitterly ironic these egregious acts are committed in a deserted church building of all places.

What is most piercing is the immediate aftermath because there is no way to disregard or forget what has just occurred. It is apparent in the eyes, the overwhelming despondency — the broken spirits of both mother and daughter.

They are left behind clinging to their bodies, clothes torn to shreds. There is no classical element like the Rape of the Sabine Women. It is all a facade, a galling lie. Rosetta becomes almost catatonic due to the horrible shock. Again, so much dwells within their eyes, going unspoken, hidden behind their glazed expressions. It is deeply unfeeling to simply label them two more casualties of an unjust war. Instead of putting words to it, the greatest form of agency is to allow us the opportunity to try and sympathize with them as closely as possible.

Sophia Loren is a reverred sex symbol and yet we cannot observe her in this light without also acknowledging the brokenness found widespread across culture. Where women are objectified, ogled, and desired. Where something sacrosanct like romantic love is trampled over for something cheaper, easier, and completely licentious.

Surely it’s within the context of war where these unspeakable things happen but still there is no excuse. The way the women are treated in this film is painfully devastating. Yes, Michele is lost, families are torn apart, and so much more, but this one incident is emblematic of it all. It’s one sign of so many other underlying issues with humanity.

The beauty of De Sica is the fact he never seems to be trying to capitalize on any amount of drama. He was a master of steeping us in very real emotions so we can better understand the plight of others not so different than ourselves.

I spoke earlier of a classical painting and somehow when the camera slowly pulls away from a mother with her child cradled in her arms, this unmoving portrait evoked the Pieta for me.  Fitting for a tradition steeped in religious imagery of the crucifixion. But it goes beyond the love of a mother for her child. Anyone familiar with the story knows that it revolves around a purportedly perfect individual’s undying love for the imperfect.

Michelle chides the townsfolk for being more dead than Lazarus. Perhaps even his own death cannot shock them back to reality but that does not mean there cannot be some semblance of hope left over. Love and resurrection; these things are still possible for those with hope and faith.