Two years ago I contributed a post to The Wonderful Grace Kelly Blogathon to commemorate the actress and cultural icon alongside my other favorite performer Audrey Hepburn. For my initial point of reference, I started with a pair of photos I’d seen backstage at the 28th Academy Awards in 1956. They, of course, had previously won for Roman Holiday (1953) and The Country Girl (1954) respectively.

As a follow-up, I have to alternative photos no doubt featured in the same issue of Life Magazine and they lend yet another candid quality to the proceedings, the first showing Grace Kelly peering directly toward the camera (Audrey’s figure all but blurred). Then in the second, we see Audrey looking on along with someone else at Grace Kelly’s noticeable excitement. Another engaging detail is all the figures visible in the reflection.

Back then, I pondered upon their interactions — what they might have been like, however brief — and also I wondered if they ever met again?  Thanks to a helpful comment and some minor investigating I came to an interesting if not altogether conclusive solution. More on that later.

First, we must take a moment to acknowledge Grace Kelly (and Audrey) as 2019 would have represented their 90th birthdays respectively. They left us far too quickly but their impact both on the silver screen and in society as ambassadors was duly noted.

But I’m sure you already have a great deal of admiration for them. I’ll let others fill in with the effusive praise for their various accolades and attributes. Let’s get on with a bit of amateur sleuthing.

It’s not too great a spoiler to say Grace and Audrey did cross paths again, this time accompanied by their spouses Prince Ranier of Monaco and Mel Ferrer.

Although we can’t carbon date, I could instantly place the photos to the mid-60s because of Audrey Hepburn’s look. It felt very How to Steal a Million on the way to Two For The Road. In comparison, since Grace Kelly had been out of the acting game for some time (since 1956) and had been all but forbid from making a triumphant return in Hitchcock’s Marnie, we can’t do the same with her hairstyle. 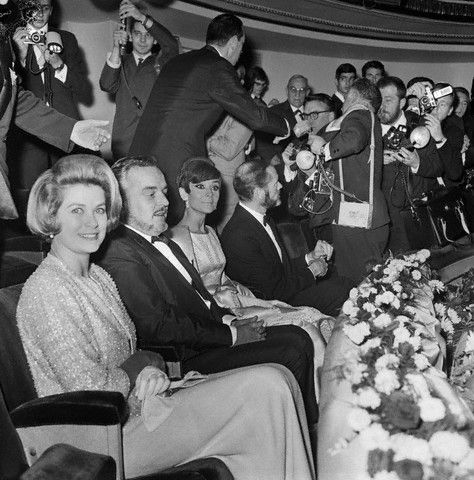 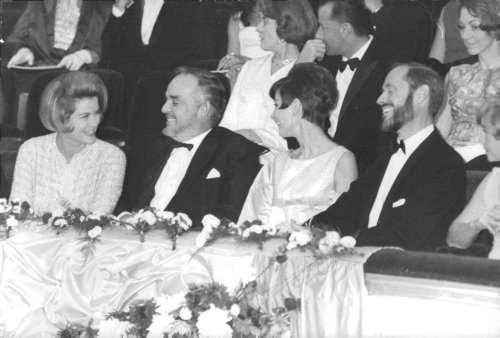 This is my best piece of legitimate confirmation from a French Getty Images caption:

From my middling knowledge of French, I gather the four aforementioned parties were gathered at the Theater Marigny in Paris on October 28th, 1965 for a “Night of Cinema.” I’m not quite sure what it entailed — if it was a retrospective of any kind — but they seem to be having a fine time, despite the host of journalists. What’s more, these images, like the backstage snaps from the Oscars, feel spectacularly candid.

If you have any more information on the circumstances of this visit, I’d love to hear it! Otherwise, this is my ending to the question I posed two years ago. Princess Grace and Princess Ann (Audrey) did cross paths, and it looked to be a sumptuous occasion.

The only things I have left is to share some double features worth checking out:

This is an obvious pairing because, for one thing, William Holden had the chance to star with Grace Kelly and Audrey Hepburn in the same year! (Not to mention Bogart and Bing Crosby). He would repeat the feat thanks to The Bridges at Toko-Ri (also ’54) and Paris When It Sizzles (1964).

This is a more thrilling pairing of two home invasion features. I’m surprised I’d never actually thought of them in a similar light, but when you have Kelly fighting for her life against a murderous husband and a blind Audrey Hepburn fighting off an intruder, it’s easy to understand why we root for them. Both these ladies all but top cinema’s likeability list.

Wonderful World of Cinema, Flapper Dame, and Musings of a Classic Film Addict, thanks so much for having me for The 5th Grace Kelly Blogathon!