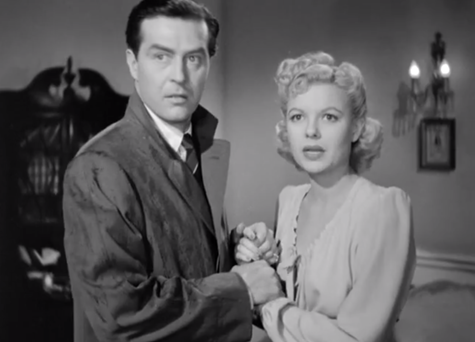 In screenwriting 101 they always say engaging movies employ ticking clocks from start to finish. Ministry of Fear takes this quite literally, opening with the tick-tock of a clock face as Stephen Neale (Ray Milland) sits in rapt attention, waiting for the bells to chime.

At first, we’re not sure where we’ve found ourselves. What’s going on? Why is he so on edge? Then, he makes his way through some stone gates and the word “asylum” is emblazoned on the front entrance. We instantly know more about him. He has a past but it seems, at least for the time being, this man has a clean slate to work with.

His first adventure upon purchasing a ticket to London is popping over to a local carnival put on by all the nice ladies of the town. But this British-set noir, directed by Fritz Lang, and based on a Graham Greene work, also begins employing a time bomb…in the form of a cake.

After an enigmatic tip from a lady psychic, Mr. Neale unwittingly acquires said confection and soon gathers he’s gotten involved in something way over his head. The MacGuffin has been brought into circulation.

It proves to be an eventful trip to London, to say the least, and not just because of the Nazis raining down bombs overheard. There’s some homegrown drama as well. As Neale starts dropping cake all over the train compartment, he subsequently welcomes in a bland bloke, only to have the mystery man run off with his dessert.

For the time being, there is nothing to do. In London he calls on a stodgy old investigator (Erskine Sandford) to back him up; he obliges only when money is waved in front of his nose. Then there’s the giggly introduction of an amiable brother and sister duo (Marjorie Reynolds and Carl Esmond) who escaped from Austria.

Mr. Neale is led to believe their business is unwittingly being used as a front for some clandestine activities involving The Mothers of Free Nations. They always were shifty characters.

Meanwhile, Reynolds dips in and out of her accent; she probably would have been served better without it. Though she is winsome enough, I’m inclined to believe the film could have been more twisted if she was, in fact, a more duplicitous dame. Admittedly, the rogue gallery is still quite busy without suspecting her.

The imposing, austere beauty, Mrs. Belaine, leads a seance joined by the foreboding Dr. Forrester (Alan Napier) and dropped in upon by a Mr. Cost (Dan Duryea), who has a very familiar face. The good doctor holds a particularly high position in the ministry of propaganda.

The unearthly environment is textbook high contrast cinematography with visages almost incandescent while otherwise shrouded in darkness. Unfortunately, there’s a shot in the dark (no Clouseau available here) and our hero must be on the run again. We have yet another tip-off that an international conspiracy akin to Foreign Correspondent is afoot.

We are treated to a Hollywood version of a wartime Underground bomb shelter as Neale looks to evade capture with Carla. We get another visual tip on Dr. Forrester thanks to ominous swastikas projected on the wall. His newest analysis “Psychology of Nazidom” is the culprit. One gathers he might have a closer relationship with the Third Reich than he’s letting on. Unless it’s someone else…

Given these details, it’s difficult not to also consider Lang’s harrowing Hangman Also Die! which tackled the Nazi menace right from the interior. The fact that the enemy might have infiltrated and live all but undetected among us is even more frightening (though these themes are not considered in length here).

Because, like Hitchcock’s best British films, Ministry of Fear is all thriller, and its main allegiance is to entertainment rather than pure propaganda. I think the years are kinder to it for those very reasons. It does not give us a completely false sense of the piety found in the world — especially in the midst of something so troubling as WWII.

There are further bomb explosions and the involvement of Scotland Yard leading to a very familiar face turning up once more. The emblematic shot of the whole picture comes when a door is closed behind a fleeing fugitive and a shot rings out, with one solitary beam of light emanating through the bullet hole. It explains the whole scene, and what has happened, in the most dramatic way possible.

A chase up to the roof ensues, where, upon being pinned down, Neale and his gal shoot it out with the enemy, the rain pouring down in torrents overhead. It looks like dire straights if not for some fortuitous help. In literary terms, I believe the accepted phrase is a deus ex machina. Because closure, as such, is hardly arrived upon so easily, we conveniently edit through the climax to explain it away.

Instead, there is a hastily cut-together ending with one obligatory mention of a forthcoming church wedding and of course, a wedding cake…It is a glib reminder noir can often bleed into the most mundane environments.

As forced as it may feel, this happy ending leaves us with nervous laughter. Otherwise, we might still be trembling considering what might have happened. I can only imagine the reactions of a wartime audience — no matter how farfetched the plot — they were living through this very real fear.