“We must never again let any force dedicated to a super-race or a super-idea, or super-anything become strong enough to impose itself upon a free world. We must be smart enough and tough enough in the beginning to put out the fire before it starts spreading.”  ~ Leon Ames as the Chaplain

This is the story of Bastogne in 1944 and the renowned Screaming Eagles. Admittedly, if you’re like me, this means very little, but fortunately, we are in good company because the men we get to know over the course of two hours didn’t know anything about the city either when they first arrived. This was not the Battle of the Bulge; it was simply a stepping stone or a weigh station on the road to their future destination. That is until it became, you guessed it, a battleground in its own right.

For the time being, they can be found drilling in smartly executed formations and getting ready for an unnamed assignment ahead. This is our chance to feel them out before they get in the thick of everything.

Director William A. Wellman does them a service in the first full scene together spread out in their cots. There’s barely enough room for the dust to settle but within the close confines, camaraderie is immediately palpable as is each man’s personality.

What a great group of guys they are covering a lot of the bases of humanity. Van Johnson and even a Don Taylor are easy to pin down because of their broad appeal and charm. They make most any armed forces picture a little more affable. Among their finest traits is exuding good old-fashioned Americanism.

There’s old college grad Jarves (John Hodiak), who gets jeered for his presumed stuffiness. There’s the gruff cynic (Douglas Fowley) always playing around with his set of false chompers like his most prized possession. (They kind of are because without them he can’t eat). Squished in with them is the gangly and drawling southern boy (Jerome Courtland), who feels like an easy trope to target in these pictures. The new recruit (Marshall Thompson) can be found nervously bed-hopping from cot to cot trying to find one he can take.

In something genuinely unusual for the period, even a Latino from L.A. (Ricardo Montalban) is represented. His best bud Pops (George Murphy) all but has a ticket home on a hardship discharge. A young Richard Jaeckel rounds out the band along with a chaw chewing James Whitmore, acting as their weathered drill sergeant.

What is meaningful about these relationships is how they reach outside the confines of the film with this inferred history we don’t know explicitly, and yet we can read into it. We know what guys have a bone to pick with the army and the ones who are trying to make the best of it.

The perilous journey ahead is riddled with enemy planes overhead, and the fog of war is quite literally laid on thick, complimenting the mud the army trucks slog through on the road. One minute they’re diving into ditches at the sound of sniper fire, and the next they are tasked with the backbreaking toil that goes with digging in for the evening, only to be pulled away on revised orders.

There’s absolutely nothing permanent aside from the constant patrolling, lack of sleep, and perpetual snow. Battleground is one of the snowiest war movies I can recall, at times, deeply striking and equally relentless.

Private Holley scores quite a cache of eggs, dreaming of the scramble he’s whisking up in his helmet time and time again — only to get pulled off for another assignment. Watching the yolk drip from his helmet is one of the defining images of the film for me as is his utter indifference. You’re never clean so why even bother.

As a fitting inflection of the Cold War, we have Germans in G.I. uniforms sneaking behind Allied lines to wreak havoc and sabotage important strategic assets like bridges. More than anything, it continually triggers this terrifying threat of infiltration. Thus, one cannot help but draw a connection to the Chaplain’s stirring speech later on (reference at the top of this page).

Amid the paranoia, it’s almost hilarious to think that the best way of telling friend from foe is baseball terms, idioms, Terry and the Pirates references, and the relationship status of the war’s favorite pinup Betty Grable (Note: Cesar Romero is out for Harry James).

When they do come upon the Krauts, Wellman captures the firefight and the subsequent hand-to-hand combat in a stylized manner to conform to the Hollywood production codes. Regardless, he manages to accentuate the rough-and-tumble brutality through boots pounding on the snow and violent inferences.

Battleground leaves unabashed sentimentality behind and it is not squeamish about death. People get picked off one by one leaving a trail of dead and wounded in their plucky company. This carnage hurts because of the rapport we build up. But even in the face of these micro-tragedies, there is no time to mourn, and their stand against the Germans proves a gutsy one. There’s no other alternative in their minds.

As we bunker down, it’s true the ensemble melds together nicely with no one actor totally upstaging the others. Certainly, Van Johnson is just left of center, if not the undisputed headliner, but even he has to navigate conventional feelings of fear and loathing when it comes to military service. He is by no means impervious to the toils of war.

In a moment of duress, Holly looks all but ready to turn tail ignominiously, but he finds his courage in the urging of another man who looks up to him — as they double back on the German lines and catch them off guard. They’ve girded their loins about them now and when ceasefire agreements and surrender are suggested by the enemy, they unceremoniously scoff at the very idea.

As alluded to already, in the thick of the hard pelting enemy artillery fire, the Chaplain holds an impromptu service. He’s of a certain denomination, but a very succinct point is made of the fact his service and his message is all-inclusive. In fact, it’s hardly a spiritual homily at all but a candid rallying cry against the forces of evil. It’s one of the most blatant examples of the film getting on any sort of didactic soapbox.

In response, each man kneels down to pray in his own way the enemy artillery fire still bursting in the background. The results are a stirring image of solidarity. They have not yet begun to fight.

Even in the simulated soundstage action, there is a compelling commitment to the atmosphere, which aids rather than hinders the story being told. It brims with the elements and forces of nature on all sides. In a last-ditch effort, all the terminally ill are moved out of the makeshift hospital, and the walking wounded are brought in for one final stand of desperation.

There is a slight sense Robert Pirosh’s script skipped over what might have been the most rousing scene. Wellman tackles the counterattack from the rallied forces with their new batch of airlifted ammunition, gasoline, and K rations in only an extended montage. 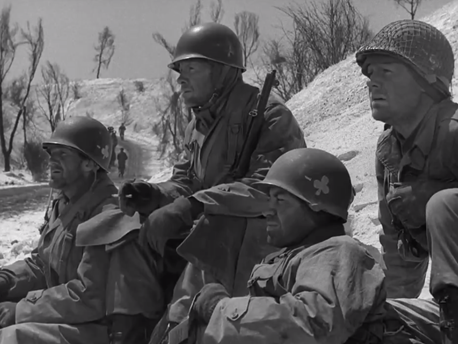 Although the ending of the war is a foregone conclusion, it very nearly could have been a letdown that we don’t get a more pronounced action scene. However, it’s quickly salvaged by the effectiveness of the final scene. It says all the same things and exudes all the same battered but resolute emotion with one simple drill, leading them off toward the rear. The men sound off with a renewed vigor knowing theirs was a job well done.

In my book, James Whitmore is the unsung hero of the picture because his grizzled mug brings so much understood texture to the world of the movie. Van Johnson is the vision of what an idealized American G.I. is and Whitmore is the more likely reality. And in the final minutes, he’s the one who leads them to the finish line. He maintains an unswerving grit and pride as tenacious as anyone.

Battleground is quite the sensational war picture while also holding the distinction of being one of the most high profile WWII films following the conflict’s cessation. It allows for this strange limbo of sorts where the war is still fresh and within grasp of the collective consciousness, but there is enough wiggle room to begin looking back in hindsight.

Surely it’s not a complete portrait, but it does well to blend shades of action with the everyday gumption needed to make it through such a conflict. What a pleasure it is to be reminded each of these soldiers is a singular human being.

It’s refreshing to have their warmth and their fears in plain view along with their courage. It feels like we can look them in the eyes and truly marvel because they are not a whole lot different than us in many ways. Their courage is extraordinary in just how ordinary it appears.