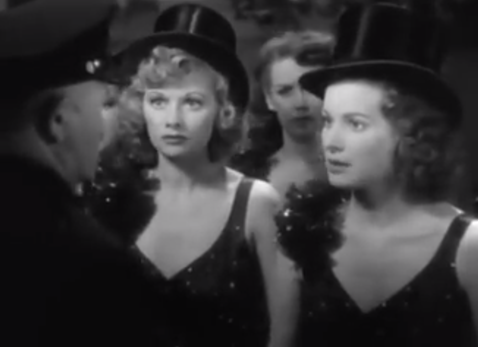 Scanning the opening credits, I noticed two talents on the rise including Russell Metty and Robert Wise, but make no mistake; the focal point in the director’s chair is the criminally-forgotten Dorothy Arzner.

In retrospect, she certainly is a primary draw to this picture because, with the dearth of female personnel actually credited behind the camera within the film industry, she stands as a pioneer for those who are aware. This is a fine starting point.

For those drawn to talent more than technicians Dance, Girl, Dance boasts a seemingly disparate pair of heroines in Lucille Ball and Maureen O’Hara, with both women making their living in a chorus line.

In their opening introduction, they are performing in some two-bit, slightly dubious joint only for the place to be raided by the cops mid-routine. It’s a sorry state of affairs as they come to terms with the fact they will not be getting any reimbursement for their night’s work.

In fact, it’s one of their good-hearted, slightly tipsy patrons who puts out his hat to take a collection. It’s not much, but the girls are grateful for his neighborliness. He’s the first of many side characters to drift in and out of their lives.

In the subsequent storyline, our two aspiring performers aptly reflect the two divergent paths with which to tackle a career in such an unstable environment. Bubbles is Ball as a full-on glam girl. She handles the part quite well because with her iconic career in humor, in some fallacious way, it often undermines just how alluring she was as a performer. Here Bubbles is shrewd when it comes to getting ahead and using all her assets to move up the social totem pole — both personally and professionally.

Meanwhile, O’Hara, in only her third Hollywood release (following Jamaica Inn and The Hunchback of Notre Dame), is called upon to exude the radiant exuberance of an ingenue named Judy O’Brien. She’s trying to do dance the right way in a callous world.

As it turns out, Louis Hayward isn’t actually attached to either of them even as they make eyes or have fancies of being with him. He’s currently still connected to Virginia Field. Yes, they are going through a divorce, but there’s still something amicable in their antagonism. Even as they play the field a bit, there’s this ongoing sense they’re still clinging to the thought of salvaging their relationship. It remains to be seen where this separate piece fits in with our two ambitious dancers.

Ralph Bellamy makes his own entrance as a dance impresario, and we also wonder how he figures into the puzzle. Though the man is never quite satisfied with the company’s choreography, he’s still Ralph Bellamy, armed with his usual lanky and unassuming charm. More than anyone else, his perceptive secretary Miss Olmstead (Katharine Alexander) is capable of getting a heartbeat out of him.

As the girls look for work, they are met with the hurdles that come with any profession. They lack transportation, they lack means; no one seems willing to give them a chance unless they degrade themselves in some manner.

Bubbles really starts raking in the dough under her new persona: Tiger Lily White. Of course, she is forced to hold court with a bawdier brand of onlooker, but she more than obliges them a la The Awful Truth’s with a slightly risque “Gone with the Wind” number. It fits her personality because she is, above all else, an opportunist, and this is the easiest, fastest way she can get ahead.  However, running with this personality trait, she also signs O’Hara on to be her stooge to milk the lascivious audience for more.

It’s less an act of goodwill and more so a calculated way to bring Judy down a peg with the rudest of awakenings. It’s the height of indignity for the idealistic girl to be relegated to such a state. Still, she pushes through it with fortitude, throwing aside her initial apprehension only to replace it with renewed determination. It’s in these interludes where our naive heroine matures and comes to terms with the world around her. 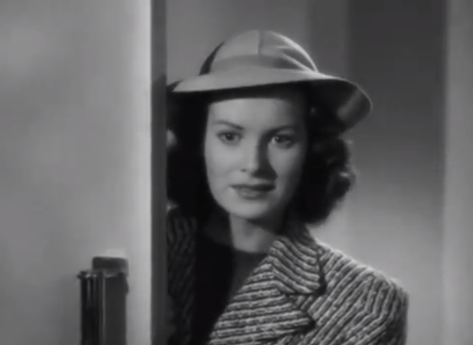 One of the most striking elements of Dance, Girl, Dance is how each and every performance reaches out into the audience in some way. It doesn’t necessarily feel like a typical song and dance musical, but it plays up the communal, reactionary elements of film and, especially, the stage.

Even as the plot is strung along and feels flimsy and detached, at times, there’s something rather freeing and appealing about the oddball supporting cast all but drifting in and out of the main narrative as nice as they please. Hayward’s playful feud with his wife Field feels all but an unrelated subplot until it somewhat ties into our main story.

Then, Bellamy and “Ommy” have their own individual, rather serendipitous encounters with the young hopeful Judy, whether in a waiting room, on the lift, or waiting for a bus in the rain. The moments do not mean too much on their own, aside from providing dashes of character. However, as they begin to stack, one on top of another, the interactions create a renewed appreciation for our characters. Even Bubbles, despite her conniving, is a memorable part elevated by Ball’s innate kineticism.

However, the most poignant scene comes to pass when O’Hara does the unexpected. There’s a steely resolve born in her eyes as she walks into no man’s land, into the space of the crowd, and confronts them in their poor, sad little lives. They pay their lousy 50 cents so they can jeer and ogle and go back to their wives and sweethearts and feel like men. There’s no integrity, no strength, nothing worthwhile in them.

The most curious thing is how she wins them over by cutting into the bawdy filth with the sharpest truth anyone’s ever dared to utter in the skeevy burlesque joint. Tiger Lily is instantly out of fashion as she and her stooge have it out because her opener has finally gained her own resolve. She’s not about to roll over and take it anymore. Far from just being a comical image in the wake of this film, it signals a change in the balance of power, as corny as that might sound.

It is the crowning capstone. Our ingenue has grown up. She simmers with fire for the first time, and it feels like we are seeing the real-life fire of Maureen O’Hara. It’s the finest, most definitive moment of the picture, allowing her to finally break out of the demureness initially fashioned for her. Before she had to mask herself. By the end, she realizes her true nature.

In the very same instance, she is able to impress something significant upon her audience, both on the screen and those watching from their theater seats. This continual relationship is Dance, Girl, Dance at its best. It’s not a supernal musical, nor the brightest backstage drama out of the age, but there are some amiable performances fostering a kind of self-reflexive symbiosis. This and its striking perspective on a patriarchal world, brim with a certain agreeable ardor. Lucille Ball and Maureen O’Hara don’t harm its prospects either. I cherish them both dearly.