Cover Up is one of the dime a dozen noir titles you have to really dig around for. It’s actually not really a prototypical film noir at all. However, if you’re a fan of forgotten unadorned small-town whodunits, it might just grab you.

Its main assets are in the script department and the presence of a couple old pros like Dennis O’Keefe and William Bendix. They practically eat crime for breakfast, lunch, and dinner so to see them in another one hardly stretches the imagination. Still, they’re as capable as ever and though the context might be pedestrian — a small Midwestern town with a murder mystery — it’s how we get to the reveal that matters most.

Take, for instance, the first time they meet at the sheriff’s office. O’Keefe is trying to file his report, and the sheriff keeps on getting distracted, telling him he should smoke less, get a pipe, etc. Meanwhile, he fumbles around wrapping Christmas presents. The quirks make the scene that much more enjoyable, though we’ve doubtlessly seen the exposition umpteen times before.

One feather in its cap as far as fleshing out an atmosphere starts with a simple detail like setting the action during Christmas. Shane Black is one to use this technique, but it immediately adds another layer to any story because it’s instantly recognizable, instantly relatable to almost every one of us. It also makes a fine contrast with any of the criminal elements.

Because it’s safe to say two of the things most diametrically opposed to murder are the Midwest and Christmas. At least until now. The out-of-town bus arrives at the local depot and we have our meet-cute over a towering stack of tumbling presents.

Sam Donovan (Dennis O’keefe) offers his services to the radiant Anita Weatherby and she reluctantly concedes. Barbara Britton is only one effulgent face among the plethora of post-war beauties, perfectly epitomizing the traditional values of the time, but she fits this role capably.

In fact, it cannot be summed up better than the moment Donovan comes a calling on the girl at her parents’ home. There’s nothing more quaint and somehow innocent than courting culture involving the entire family in cozy drawing rooms.

Donovan remains an insurance investigator by day poking around about a purported suicide based on an insurance claim. He has other ideas about the cause of death, but seeing as the gun has disappeared and all the locals are quite reticent, little progress can be made. Not unlike Reardon (Edmond O’Brien) in The Killers, he’s trying to get to the bottom of it for his company. 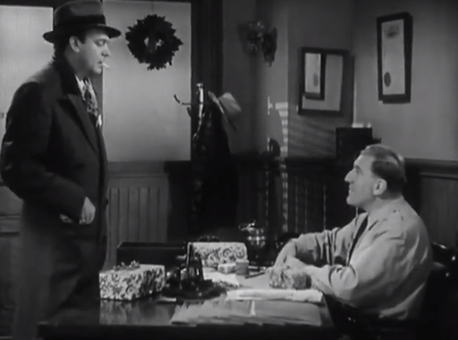 Soon it becomes obvious to him this was not simply a suicide as marked in the books, even a passing mention of a double indemnity clause suggests some form of foul play. But again, this is more The Thin Man Goes Home than it is any pernicious strain of crime flick. The token example is the sheriff’s office, which seems more in line with Barney Fife than Sam Spade.

Tired by the dead-ends and the seeming evasiveness of the local authorities, Donovan nevertheless, spends his evenings in the company of the beautiful girl. They go to the movie house where they get gawked at by an inquisitive little boy who’s already seen the picture multiple times.

The next dramatic development is the death of a beloved member of the community, Dr. Giroux, and this year, the Christmas tree lighting normally carried out by him is a little dimmer. The murder weapon also looks to be a German Luger — with at least two different owners having one of the guns in their possession. The town’s own sheriff and Anita’s own father Mr. Weatherby. It starts to make her spine shiver because she’s deathly afraid Donovan’s digging will lead directly to her loved ones. She is split between protecting her family and her new man.

Thematically, Cover Up plays a bit like It’s a Wonderful Life except the two men dueling for the soul of the town are off-screen enigmas. We never know them intimately and of course, murder is at the seat of it all. The fact this humble movie would attempt such themes is to its credit, but since these characters are never witnessed in the flesh, we have little interest in them.

It is the characters in front of us with the most relevance. So while it can’t quite manage to keep up the steam, for what it is, Cover Up is a minor Christmas delight, especially for the Dennis O’Keefe and William Bendix faithful.