What A Foreign Affair offers is a curious mix of Billy Wilder’s brand of gleeful satire with docudrama. In this regard, it stands alongside the likes of The Search (1948) as one of the earliest American films to explore the world of post-war Europe with so much rebuilding to do both physically and emotionally. It plays as a precursor to One, Two, Three (1961) certainly, offering contemporary observations of the new world order. Still, one cannot even consider these films without acknowledging Wilder’s own background.

He was an exile from Nazi Germany who was welcomed into the American film industry with a myriad of emigre filmmakers, who, subsequently, helped fashion Hollywood into the worldwide powerhouse it would become. He was eternally grateful but never allowed that to totally cow his pointed barbs aimed at America’s inherent flaws.

During the dwindling days of the war, he even served with the Psychological Warfare Department to help develop propaganda material about the concentration camps. His time abroad and the securing of funding launched A Foreign Affair as his latest project.

In the opening moments, a Senate Committee is preparing to make their official visit to observe the current climate. The script’s aims are twofold, setting up the story while also bringing audiences up to speed about the bombed-out world below.

Jean Arthur is more repressed than she’s ever been in her life with some license for her typical comedic chops written in as the narrative progresses. For now, she is a methodical taskmaster very cognizant of her constituents’ tax dollars. Perhaps we need more like her, but for the butt of a comedy, she’s an easy target. The congresswoman entreats her venerable colleagues that they must eradicate moral malaria once and for all as she’s increasingly wary of what they might uncover.

Col Rufus J. Plummer (Millard Mitchell) shows them the sights, stroking his cheek with bemusement (a recurring gag), as he catches everyone up on current events with his wry bent. Meanwhile, serving under him is Captain John Pringle (John Lund), one of the brave boys from home who has taken it upon himself to help rebuild the new world order on the liberating tenets of capitalism.

His typical hobbies include fraternizing with black marketeers to haggle for mattresses using chocolate cakes as collateral. As it turns out, it’s for a girl who drops her key out of the window every time he honks the horn of his jeep. Suddenly the film’s title has become an overt double entendre, and we have our movie.

John Lund is not without charisma and yet somehow the way he goes about this characterization feels all wrong. There’s nary an ounce of genuine charm conjured up by his faux tough-guy persona. It seems ill-fitting. At least he was likable in The Mating Season. Here he can barely hold a candle to the luminary talents of Marlene Dietrich and Jean Arthur no matter how different they might be.

As the Americans make the rounds on their carefully curated sightseeing tour, the representative from Iowa is positively scandalized by all the soldiers with their German gals. She makes a brazen decision, going undercover and winding up at a Hofbrau with a couple of lug head G.I.s,, posing as a reticent German fraulein named Gezeuinheidt.

In the process, she gets the poop on the sultry songstress formerly purported to be in cahoots with Goebbels or Gohring — one or the other. Her gabby companions surmise she still has big brass running interference for her. They’re not too far off and her Phoebe’s detective work brings her even higher up on the totem pole. The very top actually. The Fuhrer himself.

In danger of being ousted in his little arrangement, Captain Pringle starts romancing the congresswoman to keep her off the trail. If the dilemma’s not already obvious, it becomes even clearer in time. 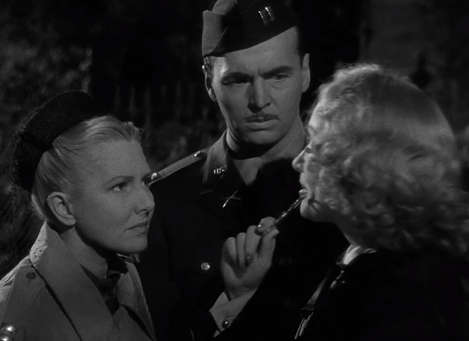 Unfortunately, A Foreign Affair drags a bit in the middle, and the plot doesn’t always maintain the usual self-assured zip of a typical Wilder picture. There are lulls and distractions, which can be enjoyable in their own right, though hardly bolstering the drama. The core issue is a lack of emotional investment in the characters. I love Jean Arthur to death, but her role flip flops too easily on its axle. Dietrich is striking as she ever was, but, again, she is larger-than-life, while the contours of the role itself feel ill-defined and uninteresting. At the very least, the stars the one making it worth it.

There was some talk that Dietrich got all the attention and the favoritism of from her director. And it’s true that she is beguiling even in this latter portion of her career. Arthur felt undercut. It starts with how the script is laid out. However, as she becomes more daring and uninhibited, one could argue Arthur gets the most out of her performance, even down to her always hilarious facial expressions.

Certainly, the camera loves Marlene Dietrich, her sleepy eyes, the husky yet sensual quality to her singing voice. That was her persona. Still, she’s the one playing mistress to an ex-Nazi so that’s not exactly the most flattering part.

Consequently, the denouement doesn’t quite sit right with me. It feels like a muddled conclusion where events just happen, winding up in a manner that tacks on a convenient rom-com ending, instead of leaving us with something that feels truly cynical in the vein you grow accustomed to with the director.

What’s most compelling is the intersection of Billy Wilder and the world of post-war Berlin. Others could have told this story, but he seems uniquely positioned to offer a very personal perspective. The curious clashing of his typical tone of trenchant comedy somehow matched with the war-torn panorama. And there are intermittent moments where this is the case.

Namely, how he’s not squeamish about showing the aftermath, nor poking the beehive of Nazism with his stick. In one scene a heel-clacking father is having trouble with his little tyke who can’t stop habitually chalking swastikas on everything. For a brief moment, we are given a reprieve and license to laugh at such a horrible ideology. It’s almost cathartically hilarious.

In another scene, Colonel Plummer notes in passing how there is rubble of all kinds, be it mineral, vegetable, or animal. We know it to be true, but what an opportunity it would have been to see more of it. I’m reminded of the scenes in the Hofbrau with song and dance and cigarette smoke or the bombed-out streets crowded with black marketeering types. I recognize these are spliced together scenes between Berlin and a Hollywood backdrop.

But this is the exact reality that feels like such a ripe birthing ground for Wilder’s comedy. I never thought I’d be the one to say this; the roots of his romantic comedy all but got in the way of what could have been.

2 thoughts on “A Foreign Affair (1948): Billy Wilder and Post-War Germany”