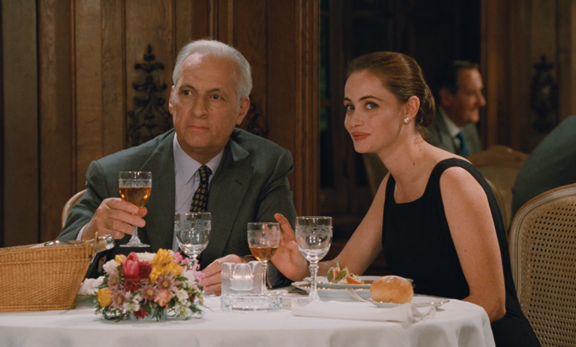 Claude Sautet’s Nelly and Monsieur Arnaud positions itself as a certain type of film. There are no thrills about it. We come to notice the normal rhythms of shot-reverse-shot along the 180-degree line. This comes because the movie is so invested in conversation. Unlike his earlier Max and The Junkmen, there is no crime or bank robbery to spice up the narrative. It relies solely on the presence of its two titular stars.

You could go two ways with this. Either you find Emmanuelle Beart’s face deeply enigmatic or it’s empty, all but emotionless as she goes through the paces of life. Because it’s true her performance is defined by her expressions or lack thereof. Her pursed lips, unflinching doe-eyes, the self-assured posture.

Likewise, you could say it’s either crisp or bland in both content and manner. Each verdict is subjective, even preferential, and thus I am open to giving Beart and the picture the benefit of the doubt.

Opposite her is Michel Serrault playing a distinguished, older gentleman who has seen more of life yet bears his own share of hangups. The common denominator is not just loneliness in a foreign land like a Lost in Translation; I think it goes beyond that to a want of day-to-day companionship, even as a form of convenience for both parties.

Because one has to admit although we’ve seen these types of movies play out, it’s still an unlikely friendship, platonic though it maybe. They receive a reintroduction at a cafe through a mutual friend. We know they come from two different stations in life. He with his divorced wife and grown kids. She with a failing marriage to a couch potato of a husband.

Fortuitously, Sautet’s “drama” does not stoop to illicit levels in order to be novel. This would waste the premise. Instead, it readily courts digressions that more than suit the amicable characters and the subdued world they’ve been born out of.

Monsieur Arnaud offers to sign her a blank check, no strings attached, and he genuinely means it. She agrees to help him with his memoirs. Perhaps she’s partially repaying a debt yet there’s also a desire to be altruistic. She sees a bit of a need and also deeply admires what he represents. Computers scare him; “They have memory without memories” as he says.

Nelly comes to know the judge-turned-businessman through the dictations of his autobiography. Moment by moment, he waxes poetic or reminiscences about his wife. He notes how “one day he became a monster” and they divorced; he must have been in an acute stage of his normal misogyny at that time. It’s terrifying to note the utter banality of the admission.

Meanwhile, behind them, his vast study full of volumes and texts is deconstructed after he gives the okay. It’s as if he’s cleaning up his life; all those material possessions he has don’t serve much of a purpose anymore. 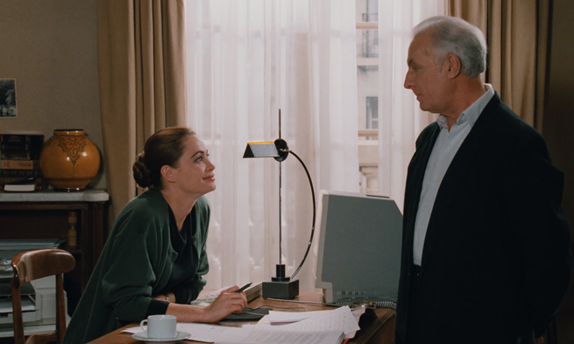 These are our main players, but around them are a plethora of supporting characters, in fact, more than one might expect in a story like this. We meet Monsieur’s daughter on one occasion and get acclimated to the family life of their mutual acquaintance Jacqueline, who proved instrumental in introducing them. Nelly meets someone — Arnaud’s publisher — who very confidently asks her out to dinner, and she accepts. Her own spouse is seeing another woman, and they all seem very amicable about the arrangement.

Certainly, Nelly and Monsieur Arnaud fails to cater to Hollywood expectations, and, therefore, it succeeds by capably taking on its own alternative outcomes. Because even I don’t feel privy to their lives. At first, it seems there’s no chemistry or at least nothing that endears them. The mundane building blocks that make up their interactions are precisely that. It’s relatively easy to lose interest and still, somehow it grabs hold of me just enough to leave an impression.

I’m not an adequate judge to discern whether this is solely a blatant generalization, but many of the most remembered actresses and actors on the European landscape in the last 25 years seem to play as the antithesis of the Hollywood elite. Yes, they share beauty and charisma, but they approach characters and acting in a different manner altogether.

It’s not full of hyper-action, histrionics, or emotional outpourings all the better for telegraphing a performance. Their work becomes focused instead around muted, toned-down reactionary micro-actions where aloof and often subtler approaches to scenes take precedence.

There is one individual scene in Nelly and Monsieur Arnaud where they do blow their tops in what feels highly uncharacteristic of both of them. It appears to be a turning point in their relationship. The beginning of the end, if you will. As she gets up from the computer and rushes out of the room toward the door, she turns back briefly. Her face is almost sheepish. He looks on rather glumly (wishing he could revoke the words that came out of his mouth, no doubt) as she says she can’t come the following day. “The day after?” she asks tentatively. He nods as she exits.

It’s so minimal, but to me, it articulates the essence of this film. We get this nugget of drama and normally we are told this is what we are building towards; this is what we are meant to be drawn to when, in reality, it’s the final act of mitigation that feels the most human. Because we are not usually hot and cold people. Our emotions are a continually fluctuating gradient of everything we think and say and express on a given day. The scene’s simplicity captures this rather well.

I had also briefly forgotten what Sautet’s earlier film was blessed with. The house party near the end reminds us. His earlier picture had color and joy. Although it can get overshadowed by all that is dour and melancholic, these moments prove integral. Music, and dancing, instances where people feel alive even for a minute. It gives them a momentary lightness of being to counteract any negativity. This only makes relationships more complex.

Nelly’s boyfriend is not content in maintaining the status quo like she is; he wants to move in together. The other option is the door and since she’s not ready for further commitment, she exits the restaurant dejectedly with one last furtive glance. Of course, she goes to Monsieur Arnaud, and he offers up his empty home. It’s slightly uncomfortable in the subsequent interlude as he watches her sleep peaceably. We edge into cringe-worthy territory…

Yet again we are reminded how much he cares about others opening up to him. He wants to be wanted by others so far that he’ll give them checks and bend over backward, even being “blackmailed” by an eccentric former work associate. Is it a sense of chivalry left over from earlier generations? Perhaps. It’s also a symptom of late-onset loneliness.

The perfect capstone is a visit from his wife; her partner has recently died and now they are both alone. Although they are not completely patched up as a couple, they do agree on a spur of the moment excursion to see the world and the grandkids, gravitating toward each other under the circumstances. Again, it’s not romance, but it exemplifies how people need other people. Regardless, it catches not only Nelly but the audience off guard with the inherent abruptness of it all.

Those seeking out some obvious closure between our title characters will not find it because it proves to be a felicitous anti-Hollywood ending. Not because it’s a total downer but for the very fact there is no illusion of finality. The undetermined states of life are slightly unwonted and yet at the very same time, it fits Nelly and Monsieur Arnaud to a tee. I have only had a brief acquaintance with Claude Sautet to date. However, from the little I know of him, it seems like a fine picture for him to end his career on. It’s not for everyone but then again, what movie ever really is?

4 thoughts on “Nelly and Monsieur Arnaud (1995): The Opposite of Loneliness”