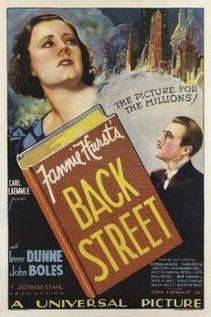 “There’s not one woman in a million who has ever found happiness in the back streets of any man’s life.”

John M. Stahl is a bit of a neglected craftsman, even by me. Like others, I became aware of him solely for Leave Her to Heaven, a noirish technicolor melodrama positively dominated by Gene Tierney.

However, as with any director, he wasn’t formed in a vacuum and during the 1930s he worked on some of his most intriguing efforts like Back Street. Then, the following year’s Only Yesterday offered up similar dynamics, featuring Margaret Sullavan front and center. Sullavan and Dunne implement different personas and yet in trying to put my finger on what might draw them together, my mind goes instantly to one thing: class.

This particular story was adapted from a Fannie Hurst novel. Dunne ably anchors the leading role of Ray Schmidt, earning a bit of a reputation because she’s a glamorous girl who likes to get out and have a good time. However, there is a distinction to be made between a girl who has no standards and one who probably opens herself up too much. Ray fits in the latter category. She says it all in one fleeting line of dialogue, “It’s all the way or zero with me.”

Opposite her is John Boles as a gentleman narcissist somehow managing to suggest the jarring contrast of mild manners and infidelity in bodily form. Coincidentally, he would also reappear opposite Sullavan the following year. Here he meets Ray, this extraordinary girl while he is still engaged, and he’s instantly smitten. It happens when a mutual acquaintance introduces them in passing, as he makes his way out of Cincinnati. It’s the beginning of something that will define their lives.

One key benchmark occurs in a local park in front of the bandstand. Walter is to bring his mother to see the performance, and he conspires to have Ray show up, making a glowing appearance, as if by accident. It’s the bit of manufactured serendipity they need to gain approval in their relationship. And yet it never happens like it’s supposed to in the movies (at least the ones we usually play in our heads).

The story starts to construct itself out of these vignettes.  It’s now 5 years later. We’re on Wall Street in New York, and the two former flames bump into each other right where they left off. The fire hasn’t died because old habits die hard. Ray willingly waits for him because it’s true there’s something electric between them. Unfortunately, it disregards reality. He’s married with two children (all but unseen).

Instead of meeting on street corners and hiding in doorways, they get a bit more sophisticated. He furnishes her with a room and so now we have the new status quo where this clandestine, illicit thing feels almost mundane.

But that’s a curious factor to Stahl’s picture. Surely it is melodrama — especially on paper — but he makes it feel instinctively human. Of course, humanity isn’t always high-minded and righteous. It can be selfish and lonely and confused. In fact, we often embody these feelings most of all.

It’s not about the accumulation or even the escalation of scenes to the apex of a bigger climax. Instead, each moment supplies an impression to add another layer to this searing romance. And it’s in these successive snapshots from which we must fill in the gaps for ourselves. It’s a testament as much to what is shown onscreen as off. This is not in the sense of Production Codes getting in the way, but a concerted choice to have ellipsis set up all around the story. We drop and then pick up the narrative at these various intervals in the cycle of life.

Later he’s too busy to get away from all his professional and personal responsibilities. These are his excuses. She’s waiting on his words, for the ring of a telephone, playing solitaire. It feels like a thankless position to be in.

Down the hall from her, a woman is burnt badly in a house fire — all but disfigured, though she won’t call her husband — she is another kept woman. Is this the writing on the wall? Ray chides her to get out, preaching independence, although she doesn’t quite know how to put it into practice. She still believes she might just be the one in a million who will make it work.

It’s the film’s first true wrinkle when she makes a decision to break with convention. It remains to be seen what the consequences might be. Kurt (George Meeker), who’s had a crush on her since childhood, comes a-calling again, goofy and endearing as ever but having made good. He casts his usual line, and it might as well be the same old story. Ray looks at him and there is sadness even pain in her eyes. He thinks she’s rejecting him again because she’s not free, and he’s right, but not in the way he thinks.

The reunion with Walter, now a successful businessman in his own right, is a complicated thing. He has a way of exerting his will on her but making it feel like it’s her decision to determine whether he is happy or totally devastated.  It’s this driving, prevailing selfishness and woebegone attitude that dominates the story.

We settle into another scene. It’s on an ocean liner. Walter is with his wife and a grown son and daughter. It has the flavor of One Way Passage and a very different sort of Love Affair. One of the most heartbreaking scenes comes when the young upstart son comes to confront Ray to try and get her undesired presence out of their life. And in another movie this scene would play out like so — at least like how he’s imagined it. She’s the wicked, opportunistic woman ready to tear through a household with blackmail and scandal.

Still, we know Ray to her core, how much she loves — how decent and thoughtful she is — and yet she has somehow found herself in such a frowned upon station in life. It doesn’t seem fair. Then again, how much does she have herself to blame? Worse yet, is the fact that the men — the ones with money and the benefit of the doubt — are allowed the position of victim.

The whole family must come to terms with reality. Walter continues with his entitled streak telling his son, “a corner of my life belongs to me alone.” There Ray is somewhat loved but literally waiting on the end of the line for him even unto death. The ending is a kicker, a fitting dream for it to coast off on even as Ray’s own light finally goes out.

Back Street is a love story that could not have existed in mainstream Hollywood a mere 5 years later. It more than lives up to its title as this little, cofounding film working not in the mounting drama but the quiet splintering of a lovelorn soul. It befuddles my own sensibilities even as it makes me sympathize with the lovers in its grips.