“Have you ever done this before?” – Robert Mitchum as Norman Clyde

“No. I’ve never stolen anything in my life.” – Laraine Day as Nancy

We’re met by a wedding with all the trimmings. It’s a well-to-do affair and Laraine Day looks quite dazzling. Her groom (Gene Raymond) is high on his good fortune in finding such a spectacular bride, introducing her to the aunts and uncles. Taken at face value, it’s a suitable development for a drawing-room comedy.

However, the perceptive viewer will note the presence of two very telling names in the opening credits. They are director John Brahm (The Lodger & Hangover Square) along with Nicholas Musuraca, who helped define the shadowy compositions of RKO Studios all throughout the 40s.

If anything, it suggests that what we’ve seen up to this point is mere pretense, an ebullient calm before the storm, until the past comes crashing through to wreak havoc. Sure enough, a grim, well-spoken psychiatrist (Brian Aherne) walks into the man’s study for a quick word. He’s comes bearing some doom to drop on the deliriously happy groom’s lap.

It lends the injection of noir sentiment we’ve been waiting for with bated breath supplying a flashback to go with it. Dr. Harry Blair recounts how, in his distant more jovial past, he wound up crashing bicycles with Nancy (Day). From then on, they were all but destined to be lovers.

It’s in these interludes where it becomes apparent Nancy is not altogether unlike Laura (Gene Tierney’s character) not because of her mental state so much as this perfectly bewitching aura she is allowed to cast over the frames of the film. Although this makes it sound too manicured; still, it’s true between the scoring, photography, and Day’s own vibrant, fully alluring performance, it’s difficult not to be swayed by the captivating energy.

The cute buoyancy carrying the opening replicates itself in this prelude as Nancy and the good doctor plan a deliriously happy future together. And yet screenwriter Sheridan Gibney brazenly interrupts the gaiety again. This time it is none other than Robert Mitchum interrupting the matrimonial euphoria with his own futile warning — yet another couched deja vu moment to follow the others.

As a matter of fact, in a spectacular move, The Locket utilizes no less than three couched flashbacks involving the three men, layered on top of one another, and each making the same mistakes as the man before them, caught in a deadly cycle…I wouldn’t recommend it to budding screenwriters, but here the commitment’s rather impressive.

This is one of the first great Mitchum performances establishing his world-wearied embodiment of the noir hero — smoking a cigarette, coat upturned in the falling snow — and he’s only one of the supporting figureheads. 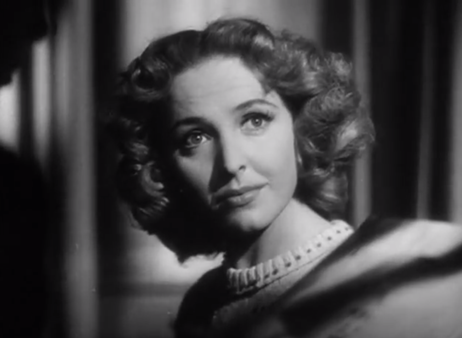 Norman Clyde (Mitchum) is a fairly successful artist, not a sterling success but talented and proud; he’s not about to take flak from anyone. After he gets off on the wrong foot with a woman in his studio, he starts obsessing over the girl. He can’t get her out of his head and wouldn’t you know, she’s holed up in the same Italian restaurant he always frequents. They make amends, of course, and their resulting relationship looks eerily similar to the glimpses we’ve already been granted. Nancy’s deliriously happy with her man of choice. There are no visible blemishes in sight.

However, the fragments and wisps of story keep on fading into one another. It’s so exquisitely rendered by the camera, in particular, when Mitchum and Day go into the recesses of their own personal recollections.

The striking similarities with Laura or even Woman in the Window become even more obvious due to the art angle — the enchanting portrait of a woman — because it does create this meta sense of the woman in the art both painted and photographed on celluloid. It allows her this sense of being out of body — almost otherworldly to the viewer — existing in this illusory state we must come to terms with. In one sense, it’s hard to shake the image of her. Nancy is no different.

One turning point is at a fancy dinner party. Shots ring out and Clyde sees Nancy exit a room frantically. A maid comes, and they hide down the hallway slinking away. Musuruca captures the instantaneous decisions with a fluid ease. We don’t realize it at the time, but it’s a crucial moment teasing out a bit more about Nancy — about her past secrets — and who she is as a person.

My only qualm is with Mitchum’s exit. It serves the story best, otherwise, he would continue to steal the show, but it certainly does not gel with his soon-to-be cultivated image. Alas, it is what it is.

Next, remember the doctor also had his chance with Nancy. They go off to England to stay at a stately manor to get away from the intensity of the Blitz. However, the accusations he’s heard about his wife start to burrow into his mind, so much so he can’t get rid of them.

Surely the rumors can’t be true! Because Nancy is so warm and genial, hardly begrudging or showing malice toward any of her past suitors. In fact, she downplays every interaction she’s ever had with any of them. As if they were nothing. As if the man she’s with right now is the only man she’s ever loved.

The extraordinary nature of Day’s character is how she is not a femme fatale — at least not in the traditional sense. They’re always two-timing and deceitful. With Nancy, at face value, you get none of that, and yet it’s not to say she’s not without her flaws. In a strange way, there are two sides to her as well.

She calls others out for being guarded, cynical, and suspicious, and yet she can often be found doubting everyone else’s motives even as she’s retroactively smoothing over her own. There’s the convenient compartmentalization of all the prior relationships into their individual spaces and the projecting of her issues onto others. It hints at something. Still, there must be a tipping point.

Then, we’re whipped back to the present. The wedding march in all its pomp becomes offset and infiltrated by the tinkling of a music box, like the memories slowly overtaking Nancy’s psyche. These latter moments turn into some of the most evocative sequences of montage in recent memory with all the weight of memory, trauma, and guilt flooding Nancy in the form of all the people she knew. There is no space to keep them apart and so they crush her under the weight, her mind totally fractured as she tumbles to the floor.

In a fit of irony, I couldn’t help but continually be reminded of the contemporary Frank Sinatra tune, “Nancy (With the Laughing Face).” It’s a startling juxtaposition with what we’ve just witnessed, a swelling, unnerving, engrossing exhibition in splintering psychology.

Laraine Day gives an absolutely unforgettable performance — easily the best of her career — and Brahm continues his run of moody melodramas with suffocating environs. The Locket doesn’t hold an instant appeal from the outside looking in, but once you get inside, it’s a bedeviling little gem of a film — as tantalizing as the trinkets so enrapturing to Nancy. There’s one major difference: we can enjoy this one without debilitating consequences.