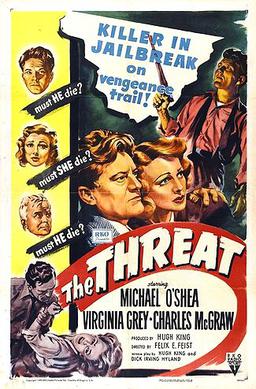 The beauty of a picture like this comes with the efficiency of the drama with a prison breakout occurring under the opening credits. Soon we learn a notorious, shadowy criminal named Kluger has broken out of Folsom prison.

The convict once vowed to kill both the detective and district attorney who worked to put him away and he doesn’t take the threat lightly. He means to carry it out.

When he finally does show his face, Charles McGraw, makes an indelible entrance almost bursting the seams of such a lowly movie. He’s so imperative to the movie’s meager claim at success destining him for thug greatness for all posterity (and a few hardboiled heroic turns once he’d paid his dues).

Felix Feist’s latest thriller is at its best putting forth its claustrophobic kidnapping scenario strung out with tension and genuine terror. Our so-called heroes are a fairly drab bunch including a career cop and family man, Ray Williams (Michael O’Shea).

In contrast, McGraw maintains the film’s gruff core more than willing to throw his weight around as he plans the rest of his getaway and subsequent revenge. To the movie’s credit, he’s liable to do anything he deems advantageous to his plans, doling out orders to his cronies, and forcibly throwing around anyone he wants. He doesn’t care about others. They’re disposable goods.

It starts with the old moll (Virginia Grey) he thinks has double-crossed him, then his two old adversaries, and finally the unwitting delivery truck driver who proves integral to his proposed plan to weasel his way past the police dragnet and network of roadblocks.

However, the tension is borne in the intervals in-between where they must wait around. First, at a house and then out at an old shack in the desert, until their buddy, Tony, drops in with his plane. Both sides are hanging on edge, either for fear of being killed or the threat of being captured.

There’s one shot, in particular, slyly setting up the dynamics of the film’s finale to come as the camera peers down into the shack they’re holding up in. With time running out, our drama must escalate. Red coaxes the gun away from one stir-crazy housemate just to turn around and use it in the next. There’s no prevailing mercy or level of sentiment, whether it’s a man or woman. It’s this continual unpredictability making for a sweaty, nasty little climax.

The plot’s breakthrough revolves around a long shot — a nice bit of circumstance — and it is by any stretch of the imagination.  I’m not sure if the logic exactly checks out, narratively speaking, though it’s easy enough to turn a blind eye for the sake of the action. You don’t necessarily seek out The Threat to feed your desire for taut scripting.

My only real qualm is how this film ends like so many others I’m seen recently where a happy ending is only obtained through a wife’s pregnancy. It is a bit of shorthand to say something about the American Dream circa the 1940s and 50s — and new life is such a precious thing — but it seems like such a tiresome trope when it’s used as a crutch so often.

Up to this point, The Threat genuinely lives up to its title mostly in part to Charles McGraw. If you’re a fan of the minor film noir icon, it’s a must-see. Otherwise, it’s best to look elsewhere for diversions of a higher caliber.