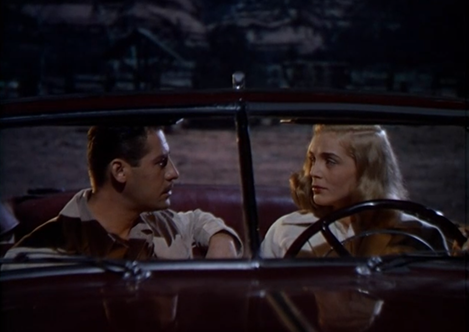 The draw to Desert Fury must begin with its intriguing cast running the range of personalities. John Hodiak and Wendell Corey (in his film debut) are driving into town. There’s this sense that their relationship is familiar but they feel like out-of-towners, somehow bringing a ting of noirish sentiment into what might otherwise be a straight-laced picture from director Lewis Allen.

The town was doubled by Piru in Ventura County and the colors of Charles Lang are grand if a tad on the campy side. All the better to serve the visual melody of the film. Burt Lancaster is Tom Hanson, the sheriff in the small town where he happens upon Lizabeth Scott on Main Street, a rambunctious creature of trouble nosing around for romance in her wood-paneled Chrysler New Yorker Town and Country. He warns Paula Haller to watch herself, which she easily laughs off before driving home.

Part of her disposition must be genetic because while they couldn’t seem different, her mother is a very independent-thinking, straight-talker who lays it out like she sees it. Fritzi feels like the toughest dame Mary Astor has ever played — the cocksure proprietor of the local gambling joint — used to throwing around money and being on top of everything, and well-liked by everyone if she can help it.

That being said, she’s hardly the maternal type — in fact, she hardly feels like a mother at all — even as she’s vehemently against Paula following in her footsteps. Because hers is a tough life doing her best to shield the impressionable girl from the same trajectory. Surely, that must be it…

The Purple Sage proves its own self-contained world for the characters to lose themselves in. Our primary players are thrown together again and it never ceases until the final exhale.

Because out of everything Desert Fury can possibly offer, the relational dynamics are one reason to latch onto the film and stick around just to feel out what’s going on and where it possibly could be heading with each character exerting their own pressures on the story.

Lizabeth Scott could be simpering but with her smoky voice and youthful looks, she always managed to be an enigma. Not always the most engaging performer but somehow she fits the curious makeup of a picture like this. As her mother observes with an inflection of eros, she’s “nice and fresh and alive.”

John Hodiak is generally curt, with an abrupt delivery and whether it’s his performance or his own nature seeping into the part, there’s no nuance or finesse to what he puts out. But as Eddie, he’s allowed the benefit of a past — a past that makes Fritzie wary of any advances on her daughter. It attributes menace to him regardless of what he is capable of offering.

Johnny is his lifelong companion since their youth, protective of him, even jealous for his affections playing as an inversion of Fritzie — as both housekeeper and bodyguard to his longtime associate. But the secrets run deeper still.

What A.I. Bezzerides and Robert Rossen’s script evolves into is this kind of tug-of-war with Paula acting as both the object of desire and the token with which to play out these feuds and affections. She gladly honks and smiles her way into all sorts of conflicts, driving her town car with a cavalier daring from the very beginning. Her sheer impetuousness propels the story.

She’s drawn to Hodiak, and he’s enchanted by her, showing her the door in another instance only to instantly revert back again to his charmed infatuation. It’s a tumultuous if moderately intriguing bedrock for romance.

Because Lancaster is invested in her too, warning against association with such a character. Whether it’s on account of her personal safety or his own guarded affections feels immaterial. Even as Fritzie offers a pact — land for the hand of her daughter — the proud lawman balks at the offer because he wants romance on his own terms.

Fritzie knows where he stands but even she doesn’t get it. One evening Lancaster walks into her office searching and yet keeping his cards close to his chest. It’s as if he’s letting her try and figure it out.

Meanwhile, Paula and Johnny have their own strange war playing out over Eddie colored with its share of passionate kisses, flying fists, and slaps of disdain. The incendiary couple ignites most of it.

However, what’s even more important is what is alluded to not simply off-screen but from each individual’s past personal dosier and shared history. They know one another out of the confines of this hour and a half. The ensuing array of heightened dramatics and supposed revelations are nothing unusual or unforeseen on their own.

It’s the observable action speaking in the final stretch (along with the theatrical Miklós Rózsa accompaniment) with cars barreling down the desert highway in hot pursuit of one another.

It’s a Hollywood denouement — hardly a reinvention of themes from love triangles to shadowy pasts — but the melange of performances and the slight subversions teased out speak to something. Where the final kiss is not between Lizabeth Scott and her alpha male but with her mother.

While not a moral tale,  it’s a movie voicing the tangled, clouded, dysfunctional relationships plaguing a small town — and the world at large. The guise of  Technicolor melodrama is a fitting pretense.