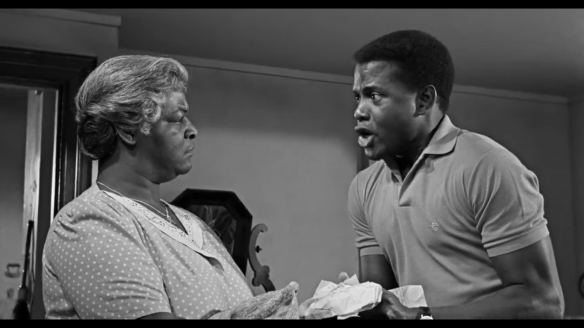 It seems that some of the greatest strides in diverse representation have found their roots on the stage. One of the cornerstone examples would have to be Lorraine Hansberry’s A Raisin in the Sun (1961). I saw the film adaptation quite a few years ago, but now, with a renewed sense of context, it’s ripe with so much more discovery.

While it might feel like a trivial observation, I was reminded how the movie is laden with nagging, moaning, and groaning as you would find in any family living in close quarters. For this very reason, the stage conventions feel less of a limitation and more of an expression of this family’s tangible struggle.  But it also feels like a safe space for the black cast where they are able to express themselves in all manner of ways. One moment they’re wild — gesticulating all over the place — and the next minute is the height of silliness. It feels almost unprecedented for the era.

Sidney Poitier is often shafted for playing an “Uncle Tom” because detractors have some kind of preconceived straw man of him they’re prepared to tear down. Whatever your thoughts on this, Walter Lee Younger is just the character to rip those presumptions down to their foundation. His main credo is built around the idea that money is life and despite everything Poitier became known for over his illustrious career, in A Rasin in the Sun, nobility goes straight out the window.

But it’s not simply a story about a man, because we must consider the entire family as they wait impatiently for the $10,000 insurance check set to be bequeathed to their matriarch Lena Younger. Walter Lee can’t wait to siphon off some of the funds for one of his shady business deals.

His sister, Beneatha, is a young free-minded woman of the modern world with aspirations of becoming a doctor. She’s hoping for some financial support to make her dreams come true. Marriage is considered an afterthought.

However, whatever she might say, there are two worthy suitors played by a pair of familiar faces. Ivan Dixon is the benevolent Nigerian suitor: Mr. Asagai, tickled pink by her iron will and prepared to take her back to his homeland. The other is Lou Gossett Jr’s George. He’s hoodwinked by Beneatha’s recent behavior and when he comes a calling, he’s left on the couch to crawl out of his skin. Walter’s ready with the rich black college boy wisecracks or else prepared to proposition the boy’s daddy with one of his business ideas.

Beneatha and Walter have plenty of sibling animosity to go around (I dissected something that looked just like you yesterday). And she also receives the ire of her mother because God has no place in her personal destiny. She tells the scandalized old lady point blank, “I get so tired of Him getting all the credit for everything the human race achieves through its own stubborn effort. There’s only man and it’s he who makes miracles.” Needless to say, it doesn’t go well.

Because the movie is borne out of this generational difference. Lena Younger (Claudia McNeil) was raised up a certain way, and God will always be present in her house just as family and charity are of great importance to her. She’s not a woman trained in book learning, but she is a picture of stalwart character. Keeping her family together means everything to her, but she will never become a slave to money.

Ruby Dee is the only one who seems unencumbered by the thought of worldly wealth and what it will do to them, both good and bad. Instead, she works diligently at her laundry and becomes a kind of calming force in a house that feels constantly in a state of familial tumult.

This is what makes their final introduction to their new home that Lena plans to purchase so cathartic. When they drive up, walk up the steps, and then rush around the house, it’s a slice of suburban heaven, albeit situated in an all-white neighborhood. As a housewarming gift, her kids pitch in for some gardening tools, and it speaks to her character — always wanting to till the soil and cultivate all that is around her with love.

However, we must also take a moment to mention John Fiedler and Clybourne Park Improvement Association. He’s a favorite of mine from 12 Angry Men, The Odd Couple, Bob Newhart, and of course, he’s the voice of Piglet. What an inspired piece of casting it is to have this diffident, genteel little man be the face of de facto racism in the world we live in. He’s perfectly civil; he will gladly trade pleasantries, and yet his people want no part of blacks in their neighborhood. At any rate, it doesn’t fit the agenda or the name of their little two-bit association. 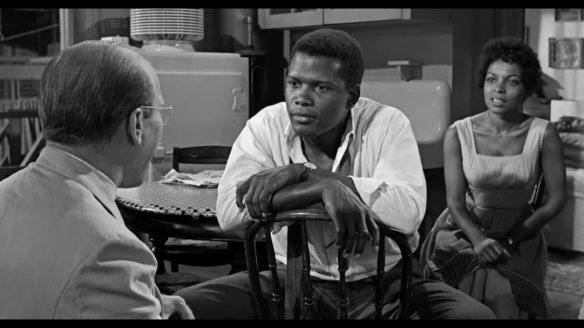 It all comes down to his fabled line: “race prejudice simply doesn’t enter into it.” These are like trigger words signaling a gunshot going off. When he’s out of the room, the more satirical members of the Younger family rephrase his words: “he can’t understand why people can’t learn to sit down and hate someone with good Christian fellowship.”

If you’re anything like me, these words sting a little. But that’s nothing compared to what hits Walter. The hammer drops when a no-good shyster runs off with some of his money. Ever the principled moral compass, Lena gladly loves others at their lowest, when they’ve made a mess of things and the world has whipped them. Because despite all of her unyielding values, she’s a creature of love and integrity.

Poitier makes his final stand — his first prominent act as head of the household with the blessing of his mother — like his father would have done before him. So perhaps I wasn’t quite right. Even in this picture, Poitier makes a stab at nobility. The greatest part is how he’s given license to fail.

Although their hope might be deferred, they still have hope nonetheless. What a lovely reminder it is about the human spirit. We are thoroughly irrepressible creatures and strengthened in the arms of our loved ones. Let that hope reap heavy dividends. My prayer is this comes sooner rather than later.

What happens to a dream deferred?
Does it dry up
like a raisin in the sun?
Or fester like a sore—
And then run?
Does it stink like rotten meat?
Or crust and sugar over—
like a syrupy sweet?
Maybe it just sags
like a heavy load.
Or does it explode?
– Langston Hughes