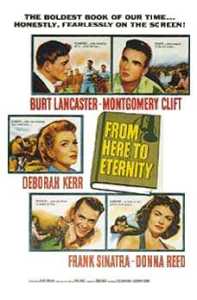 Directed by Fred Zinnemann, the film has an all star cast including Burt Lancaster, Monty Clift, Deborah Kerr, Donna Reed, and Frank Sinatra. Clift is a former boxer and bugler who has been transferred to a post in Hawaii. The commanding officer wants to have him fight for the company but Clift is adamant that he will not. From that point on life is made difficult for him on the base. However, he still finds time to go to a club with his friend Maggio (Sinatra) where he meets Lorean (Reed) and falls in love. At the same time the intelligent company sergeant Lancaster, finds himself falling for the commander’s wife (Kerr) who has an unhappy marriage. However, he feels he cannot become an officer effectively terminating their relationship. The dramatic events culminate in the attack on Pearl Harbor which overshadows a smaller tragedy. This movie certainly had a cast full of famous people, but I have to say it was not my favorite film. All the same there definitely are some good moments.