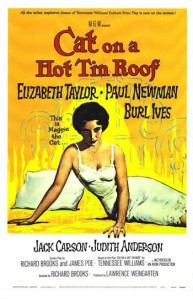 Adapted from the Tennessee Williams play, the film stars Elizabeth Taylor, Paul Newman, and Burl Ives, with Jack Carson, and Judith Anderson. The film opens with Brick Pollick (Newman) injuring himself while he is drunk one night. The next day he is still constantly drinking and cold to his wife Maggie (Taylor). We learn this is because of the death of a friend. At the same time Big Daddy (Ives) arrives to celebrate his birthday with his family. The evening is full of angst and conflict over Big Daddy’s health, lies, truth, power, and love. Maggie wants Brick to look out for his interests based upon the conniving actions of his brother’s wife. Brick wants nothing of it and eventually tells his father so. They reconcile and Brick makes up with Maggie ending this film on a positive note. This film was certainly full of unrest and drama showing people struggling in love and figuring out their lives.