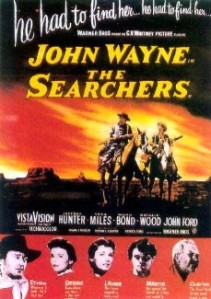 One of John Wayne and John Ford’s best westerns respectively, The Searchers follows an ex-Confederate soldier (Wayne) as he looks for his niece Debbie, who was taken by Indians when they killed her parents. Now Wayne and a young man played by Jefferey Hunter must look for her and bring Debbie home. With an almost obsessive desire, Wayne’s character Ethan Edwards vows to find her. Along the way, the old vet and young man have conflicting personalities that get in the way. Even when they finally find her, she has become more Indian than white, and Edwards seems bent on killing her much to Hunter’s horror. In the end, the gruff but courageous searcher shows his true colors.

A great western, and simply a wonderful film, The Searchers has a lot to offer with great action, Monument Valley scenery, and of course John Wayne. The supporting cast is good as well, including Vera Miles, Natalie Wood, Ward Bond, John Qualen, Hank Worden, and Ken Curtis.

There are some pivotal scenes in this film that I think really get to the core of what it is about, and Ford constructs a multitude of scenes which are simply a joy to observe as they unfold. One turning point has to be when the two Searchers look over a few white girls that the cavalry recovered from the Comanche. One of the girls gives off a childish screech, which causes Ethan to turn around, and Ford’s camera closes in on his scowling face half covered by shadow. Here is a proud man who would not surrender during the end of the Civil War. Here is a man full of prejudice and vengeance. Here is a man who shows glimpses of kindness, and here is a man who knows pain. It is complicated because he heads out after Debbie seemingly in an act of love. But soon it seems that it has become his vendetta, and Ethan has simply become bent on revenge. It takes his final confrontation with Debbie to reveal the true depth of his character.

Undoubtedly this is one of the preeminent American westerns, but I think you could also call it a social commentary on racial prejudice. Furthermore, The Searchers influence ranges from the plight of Luke Skywalker in Star Wars to the music of Buddy Holly (“That’ll be the Day”). I think fittingly enough the film ends with Wayne framed in the doorway, walking off into the distance. After all, he is a searcher, and you cannot expect a man like that to stay put.