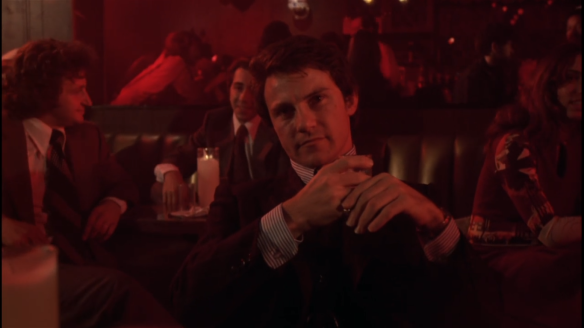 Martin Scorsese will always be synonymous with Taxi Driver, Raging Bull, and Goodfellas, but if we want to truly chart his ascension as a singular creative mind, Mean Streets must be our genesis. Because it essentially lays the groundwork for his entire career.

In truth, it’s the strangest gangster film of its kind; it’s emphatically Scorsese’s, full of his pulse and life-blood –his love of cinema. It is a gritty and intimate creature born out of the American New Wave, further imbued with religious imagery and the imprint of something starkly personal.

Though Robert De Niro might seem the obvious figurehead to gravitate toward, in this instance Harvey Keitel is our true vehicle to move through the picture. We get a line on him from his opening lines lying in bed, “You don’t make up for your sins in church. You do it in the streets.”

Because here’s a good kid trying to look out for his friends, while working for his uncle who happens to be a powerful loan shark. There is no grandiose story arc here. At the most mundane level, most of the story revolves around the even-keeled, responsible Charlie trying to vouch for cocky local hothead Johnny Boy (De Niro), who has the continual insolence to dodge his creditors, perpetually trying their patience with his brazen excuses. He’s the type of jerk you’re never going to straighten out.  He just never learns.

The majority of the film has Charlie playing peacekeeper, though he also has the preconception that he holds his own fate within his grasp. The moral issues still gnaw at him. He wants to be his own savior. He’s proud and self-sufficient. 10 “Hail Marys” and “Our Fathers” will not satisfy him. They’re just words. He wants to make his own penance for his own sins.

Meanwhile, his uncle tells him to stay away from Johnny Boy. He starts seeing Teresa (Amy Robinson), Johnny Boy’s cousin (and a lapsed epileptic), which is another rocky relationship, partially due to her own hatred of her cousin. Michael (Richard Romanus), a small-time shark gives him fair warning multiple times; he’s not about to take any more of Johnny’s crap. Somehow Charlie seems able to assuage him.

He hasn’t accounted for just how extreme of a hot-headed punk the kid is. In one isolated event, he finds Johnny Boy on a rooftop firing off a piece just for kicks and giggles. He seems to think it was a perfectly good idea, and he holds no respect for any form of social honor. This is near blasphemy in such a time-honored traditional society. 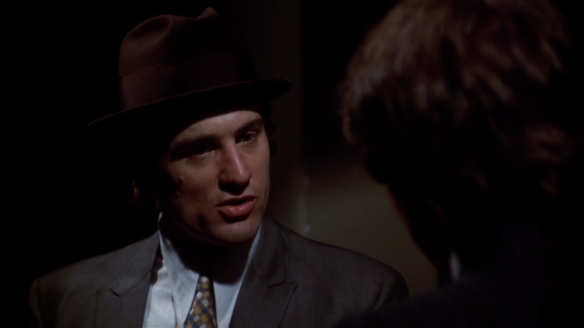 As with anything Scorsese, it’s not simply about narrative but form as well, and one of Mean Streets‘ most notable successes is in the cutting of the footage to music. Charlie’s life is brought to us via home movie newsreels and The Ronettes “Be My Baby.”

De Niro certainly makes Johnny Boy pop, but his introduction shouldering two women in a bar, sashaying toward the camera in slo-mo to the pounding jagged edges of “Jumpin Jack Flash” is nothing short of virtuoso. It’s hard to even imagine the images outside of the context now. Because it’s totally indicative of the world Scorsese is introducing, bathed in red hues with a swaggering Robert de Niro, and Harvey Keitel watching from the bar.

The oddly discordant matching of “Please Mr. Postman” with a pool hall brawl instigated by Johnny Boy (surprise, surprise), provides a similar mental association as does “The Shoop Shoop Song” played over a brief image of Charlie just about to stick his hand into the flame of a stovetop. The reason is immaterial. The emotion is what speaks.

It’s true American Graffiti might be the quintessential soundtrack movie, but Scorsese’s soundtrack for Mean Streets deserves laud in its own right. Not only is it packed full of classics, they are such effective pieces of this narrative helping to cultivate the mood at any given point in time.

Obviously, Scorsese is a lover of movies, but in the context of this story, they also have a very personal function. They provide a cutaway from the world — existing as diversions and distractions from the daily grind whether it’s The Searchers or The Tomb of Ligeia. It makes no difference. Scorsese allows a reverence for everything, whether it be on late-night TV or a cramped, musty old movie theater.

Even when taking this into account, it’s easy to write Mean Streets off initially as just another gangster movie, especially if you try and analyze it retroactively. But this could not be further from the truth.

Because while rock soundtracks are the norm now, George Lucas and Martin Scorsese were invariably at the forefront of this trend. They make the sound work seamlessly within the context of their stories. It adds layers that would be lost otherwise. There’s something powerful provided by the music working counter to the typical beats of non-diegetic scoring.

Consequently, I cannot help but recall Scorsese talking about his infatuation with Force of Evil (1948) because, within its poeticism, it manages to be equal parts small-time corruption and family drama, all in one.

The world of Mean Streets is analogous. It feels every day and unsentimental, ringing with an obvious authenticity. Because Scorsese is sharing a bit of his childhood neighborhood with us. These characters. The relationships and the business they find themselves in. There is nothing glamorous about it and when someone is willing to bring us something so close to them, they should be rewarded.

Without a doubt, Scorsese expresses deep affection for Hollywood, but he readily bursts forth with his own shot of individualistic adrenaline. These are the kind of efforts that made The American New Wave a boon of cinematic creativity and Mean Streets, with Scorsese as its maverick, must be kept front and center in the collective conversation. There’s no question the collaboration of Scorsese and De Niro is still one of cinema’s most transcendent.

Mean Streets forces us to extend more love to Harvey Keitel as well. The film could not be realized to this extent without all their talents coalescing. Somehow they share a joint language adding up to a shared experience. They know these people and these places on an intimate level, and it shows.