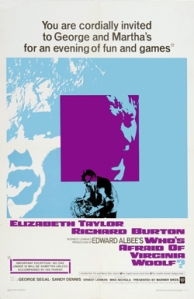 Starring Elizabeth Taylor and Richard Burton with director Mike Nichols, this taboo-breaking adaption of the stage play revolves around a middle-aged couple. George is a professor and he and his wife Martha have a love-hate relationship. Urged by her influential  father, Martha invites a young couple to their home. Because of the late hour and lots of alcohol, the rest of the evening becomes a wild war full of nasty insults, hurtful games, and manipulation. Martha and George use their guests and go as far as physical violence. However, in the end secrets are uncovered and they realize that they truly are afraid of Virginia Woolf. What began as a joke became all too true. At points this film seemed to elude me but I will say the acting was intense and powerful. There were moments where you disdain these people, then you feel pity for their plight, and other times you may even be able to relate to them in some ways.