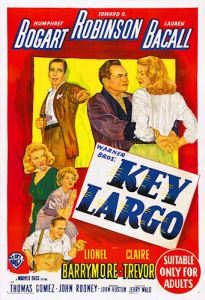 Starring Humphrey Bogart, Edward G. Robinson, Lauren Bacall,  with director John Huston, the film takes place on a sweltering day during the hurricane season. Bogart is passing through Florida to say hello to the relations of a dead war buddy. In the process he and the others at the hotel are held hostage by the mobster Johnny Rocco (Robinson). Bogart seems to back away from conflict but he is only biding his time with the villainous gangster. Through a series of events the war veteran is supposed to pilot the mobsters to Cuba, however he ultimately turns on them and brings justice. This is a fairly good film with Lionel Barrymore, Claire Trevor, and Jay Silverheels in support. It must be mentioned that this was the final film pairing of Bogey and Bacall. Get ready to sweat it out in Key Largo.

In honor of Lauren Bacall