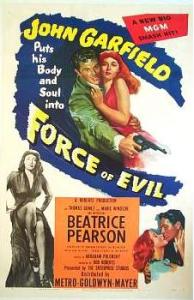 “This is Wall Street… and today was important because tomorrow – July Fourth – I intended to make my first million dollars. An exciting day in any man’s life. Temporarily, the enterprise was slightly illegal. You see I was the lawyer for the numbers racket”  ~ Joe Morse

Not in recent memory has a film left such a different taste in my mouth. Force of Evil has all the trappings of a thoroughly engrossing noir crime film. There’s the crooked lawyer Joe Morse (John Garfield), looking to get ahead by helping a top level gangster named Tucker take over the numbers racket in New York. There’s his estranged older brother Leo (Thomas Gomez) wanting nothing to do with his brother’s dirty money. It’s a classic Cain and Able type conflict. Add realistic location shooting inter-cut with voice-over, and a David Raksin score to make a real winner.

Yet Force of Evil is a dangerous film to take at face value because on that level alone it is highly entertaining. However, director and screenwriter Abraham Polonsky created something special here at only 78 minutes in length. His film has a certain rhythm that is hard to pinpoint. John Garfield especially delivers his lines impeccably, drifting in and out of common everyday jargon and moral convictions. It’s a slightly higher level of dialogue that deserves more digestion and thought. He even gives a taxi cab soliloquy that gives On the Waterfront a run for its money.

As a big picture, the plot makes sense for the most part. Joe is on the verge of making millions on the Fourth of July, and he wants to cut his brother in on it. But his brother works one of the smaller rackets which is bound to be pushed out. He has his own sense of morality, where he can bear what he does but not what Joe will hand him.

Leo reluctantly agrees to join the big operation out of necessity until things get way too involved, and this time Joe is in a place where he has to get out himself, with no way of protecting his brother. His resolve to watch over his brother is to no avail when the Ficco Gang tries to push their way into the racket. Meanwhile, Joe still finds time to flirt with the innocent and proper Doris Lowry (Beatrice Pearson), the former secretary of Leo, who is in complete juxtaposition with Mrs. Tucker (Marie Windsor), who Morse keeps company with initially.

However, this whole mess is constantly being complicated. There is “Freddie” Bauer (Howland Chamberlain), the nervous fellow who used to work with Leo and now, with the big takeover, is looking to blow the whistle on whoever he can to stay out of the fray. There’s the police who seem intent on getting their hands on everybody they can and not showing favoritism towards anyone. There’s Leo who is righteously indignant while also taking his brother’s offer of a better position begrudgingly. There’s Doris who is in all ways sensible and yet still falls for Joe, not in your typical passionate way, but it still happens nonetheless. There’s the line between legitimate business and criminal activity that is constantly be zig-zagged.

Finally, there is Joe who deserves the greatest amount of scrutiny. John Garfield apparently could not pinpoint his character’s deal initially either, but he must have figured it out because he nailed it. It’s probably his greatest performance. He’s the kind of guy who blows the whistle on his own brother in order to help him in his own way. It doesn’t quite make sense, and he seems so often blinded, but he keeps pushing forward in a vain attempt towards success. All the caustic words and aggressive come-ons don’t work. Ultimately, he has to come to reality. When Joe does, that’s when he realizes what he has started and what he has done to Leo. By that point, it’s nearly too late for him, and it’s most definitely too late for Leo.