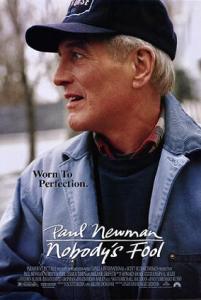 Earlier this year I wrote a piece on the evolution of acting that I envisioned as a case study of sorts. The second wave of actors I attempted to analyze included the likes of Marlon Brando, James Dean, and Paul Newman.

It is this last figure I wish to look at again in the context of Robert Benton’s 1994 film Nobody’s Fool. In all areas, this drama meanders along following town grump and crotchety ne’er do well Sully Sullivan (Paul Newman), who works as a freelance construction worker in a peaceful, snowy New York getaway. So, by all accounts, it seems like it should be a complete and utter bore, but it is not thanks, in part, to Paul Newman and his array of supporting players.

As I have watched more and more films in the last half a dozen years or so, there has been an ongoing trend where I tend to care less and less about substantial plot and more and more about characters. Don’t get me wrong, I love a taut thriller or an engaging mystery story, but the films that really do it for me have memorable performances that reflect a bit about the world we live in. Sometimes I even feel like a broken record, because I reiterate this fact so often, but I believe it to be the truth.

In other words, it feels utterly superfluous to go in depth about this film’s plot. It’s about a no-good Paul Newman, who left his wife, left his son, and never turned back. Now he must accept the path he chose and decide whether or not to spend his waning years finally getting to know his son and grandkid. It’s not rocket science by any means, and the film certainly feels dated, but Newman strangely does not, although his hair is a little bit whiter.

Now back to the generation of actors he came out of. They were the young, moody band of men brought up on the method that taught them to grab hold of emotions and experiences to be projected on the screen in each role they took. Dean was legendary, but his career was cut short. Brando was a giant, but slowly fell from grace and his waistline grew. Newman was famously married to his wife Joanne Woodward for over 50 years, started the charity Newman’s Own, and continued having a media presence in the late 20th and early 21st century. In other words, he aged gracefully compared to many of his contemporaries.

falls closer to the tail end of his career, but he has the same gleam in his eye or maybe it’s that sour smile with a hitch in his giddy-up. But it feels genuine, it feels relatable, and it feels very much like the Paul Newman many people know and love. I know I do. He’s so often a malcontent or a bum and yet we cannot help but root for him. He also has some wonderful moments to work with the likes of Jessica Tandy, Bruce Willis, and Melanie Griffith, among others, because first and foremost this is a film about relationships. These are people who have made mistakes and who are not always the wisest, but somehow we still appreciate them with all their faults and peculiarities. I guess that’s what the small town mentality does, in a way. You get to know everyone and you come to accept them for who they are. Stealing a snow blower, playing cards, drinking a beer, or buying your daily trifecta ticket just feels commonplace. That’s life.