“You can’t just do anything at all and then say ‘forgive me!’ You haven’t changed a bit.” ~ Colette

The prospect of watching Love on the Run saddened me and not for the reasons you might expect. Not because it’s noted as the weakest film in Truffaut’s famed Antoine Doinel series, although that it is. Not because it utilizes a clip show rather like a lazy sitcom as some will undoubtedly note (although this does actually give way to some rather entertaining reminisces as Antoine crosses paths with two old acquaintances). And it’s not even because this is the last film in the series and Truffaut never got around to any more installments before his death in 1983. Though that is sad.

The truly heartbreaking thing about this film is not even the fact that Antoine and Christine (Claude Jade) are getting a divorce although that is at the core of it. It’s that Antoine, who has long been the focal point of these films with his certain brand of charming charisma, really has not changed a great deal.

Time and time again, his superficial relationships with women are explored and time and time again his self-destructive habits hardly seem playfully entertaining but if you want the most honest answer, it’s all rather disheartening.

He has a new girl who we meet in the opening credits. Her name is Sabine. She’s young, radiant, very pretty and works in the local record shop. If we didn’t know any better we could easily make comparisons between her and Christine.

We see that little boy from 400 Blows and even that same young man looking to win the affection of a cute brunette named Collete. However, now a few years down the road, none of that panned out. He’s terribly selfish, undeniably a cad and always trying to say he’s sorry to save face. Sabine says it well when she calls him a pickup artist (You sure have a strange idea about relationships. You seem to only care about the first encounter. Once they’re together it’s all downhill).

However, if we look again we remember that Doinel’s home life was hardly a prize, schoolmasters were unfeeling and his mother passed away — the only real family he had in the world.
Maybe, 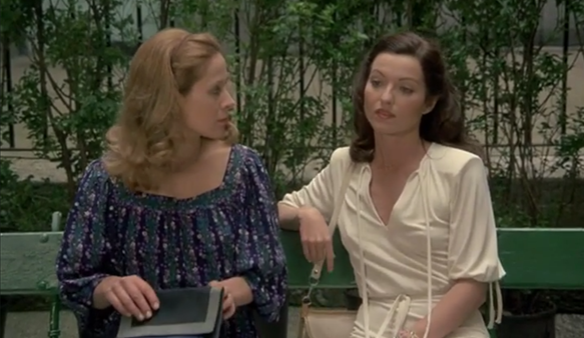 Antoine Doinel is a character who thinks only in the cinematic and it is true that he often functions in a bit of a faux-reality. He seems normal but never quite is. He seems charismatic but we are never won over by him completely. Still, we watch the unfoldings of his story rather attentively.

Like all the women who he tiptoed around with, as an audience, we have liked him but never truly loved him — an important distinction to make. And coincidentally, we also see right through him. Perhaps because he’s often too much like us or other times not enough like us. It’s hard to put a finger on which one it is exactly.

We leave the film essentially where it began. Antoine has once more been scolded by his girl and made up. It’s difficult to know quite precisely how to feel about that. Love on the Run is worth its nostalgia, woven in between the most recent moments of Doinel’s life. While his character is trying, he is still strangely compelling. But at this point, it’s hard to know what to do with him. Nevertheless, Francois Truffaut was unparalleled in the continuous narrative he was able to craft — flawed, personal and most certainly memorable.