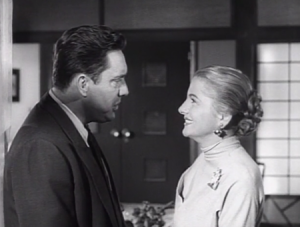 I despise you and I pity you. ~ Edmund Gwenn as Mr. Jordan

The Bigamist is at first a delightful noir — in one aspect unassuming and yet groundbreaking when put in a broader context. Ida Lupino is not simply a good female director. She is a good director, period.   She left a body of work both behind and in front of the camera that speaks for itself. Even the small ones like The Hitchhiker and The Bigamist have a certain strength about them.

In this case, the film’s title flashes with the superficial tinges of a sordid drama but when you actually get into the thick of it all, there’s a great deal of tenderness and certain heartbreak there.

In some ways, Edmund Gwenn becomes our main character’s father confessor as the protagonist explains how it all began through flashback: The plotting is simple. Harry Graham (Edmond O’Brien) found himself living a double life. But it’s not just that. He loves his wife Eve (Joan Fontaine). They genuinely care for each other deeply and now they share together in business but he spends a great deal of his time on the road. They’re even planning to adopt a child together since Eve cannot have a child of her own. Obviously, during his frequent bouts on the road, Harry gets lonely and we’ve undoubtedly heard that excuse countless times and it’s been the calling card for a great deal of infidelity. 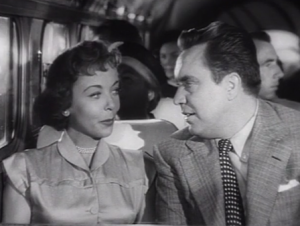 Except at first what Harry does, does not seem like infidelity. In one integral scene Harry takes one of those bus tours to see the stars because, after all, Beverly Hills is that land of movie stars and their extravagant lifestyles. Jimmy Stewart, Jack Benny, Oscar Levant, Barbara Stanwyck, and Jane Wyman are all given a nod. There are even a few playful in-jokes to the always genial Edmund Gwenn who turns up as the adoption agent. All of this is essentially fluff but it’s on that same ride where he meets someone — a woman named Phyllis Martin (Ida Lupino).

It’s true that they’re both looking for a friend and they gravitate towards each other. It’s nothing more than that and Phyllis invites her newfound friend to a restaurant made in the popular mode of Early American Chinese. It’s where she works. But he hardly cares. He sees her more and the most astounding thing is that he tells his wife about it almost in jest saying he met a brunette in California. The reason he cites: she wasn’t beautiful but she was nice.

And right in that moment, you can see what’s particularly striking about The Bigamist. It’s a frank, open, and honest film in an often prim and proper era of certain sensibilities. The Bigamist looks to be a film to trod all over those social mores and yet extraordinarily enough it doesn’t. Yes, in certain ways it dissects them but it does it with great care and a tenderness for all parties involved.

It’s not so much a dark brooding noir but a film of interpersonal tragedy rather like earlier such examples as Pitfall or They Live by Night where bits of darkness pervades the home and relationships which are admittedly fragile because of the humans involved. Topics of divorce, infidelity, and pregnancy further complicate matters.  But not in some lurid exploitive way to sell tickets.

It’s oddly ironic on multiple levels. Of course, we know as an audience that he is seeing another woman but that’s only the beginning. In a major fit of situational irony, it works exactly contrary to what we might expect. Edmund O’Brien’s lead is a good and decent man. His wife is not a holy terror but played by one of the sympathetic heroines of the 40s and 50s, Joan Fontaine. Furthermore, Ida Lupino is not some sleazy femme fatale. In fact, she’s the one who initially rejects his advances and shows reluctance to marry him. 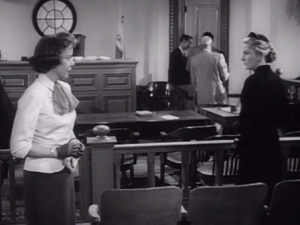 It strikes me how it’s often the small, tiny, unassuming pictures that impact me the most and this film did wrench my heart over the course of only a very few minutes. The final court sequence sums up the reasons quite well because it ends the film on a moral note setting up a rather convicting paradigm.

We see both women there. We see the accused sitting in front of the judge and jury willingly admitting his guilt. His is a society that winks an eye at a married fellow with a mistress and yet he, a man who genuinely loved two women, is found at fault under the law. The defense attorney on his behalf calls for punishment tempered by mercy.

When those two women walk out of the courtroom as the proceedings end, it does not mean that any of it can ever go back to normal. Will either of them even take him back? We can make an educated assumption but that’s not really for us to know. However, on a universal level, the words of the attorney reverberate in my ears. Each one of us has aspects of our character that are undoubtedly despicable but also elicit pity. It only makes sense that each of us deserves a certain amount of punishment but also a measure of mercy. It’s up to us to extend that to others. Because the reality is that we might not be that much better than the eponymous bigamist. Judging by his character we might actually be far worse.