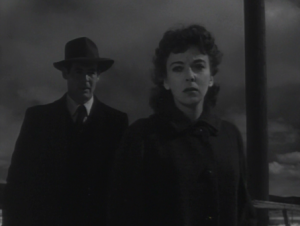 Father hear my prayer. Forgive him as you have forgiven all your children who have sinned. Don’t turn your face from him. Bring him, at last, to rest in your peace which he could never have found here. ~ Ida Lupino as Mary Malden

On Dangerous Ground is essentially a throwaway plot about nothing but Nicholas Ray turns it into to something — something about everything that is universal and even transcendent about film. Bernard Herrmann’s score draws the audience in with a killer hook as he did for many of Hitchcock’s most iconic films later in the decade.

There are cop killers on the loose and the force is on high alert. The particular cops that we have the benefit of following get the honor of scrounging around every dive bar and crummy joint in town where the scum of the earth dwell at all hours.

It’s in these opening vignettes that we are introduced to the seedy underbelly of the urban wasteland. It’s no good but there are innumerable interesting characters and they’re not all bad. There’s Doc at the drugstore ready to fix ailments while also being handy for a sundae. Streetcorner newsmen are ready with a tip in a pinch almost on cue.

Still, Jim Wilson (R0bert Ryan) is all out of sorts — restless and prone to aggressive outbreaks. He’s not sparing the rod when it comes to apprehending criminals and questioning riff raff. And the very fact that Robert Ryan almost always has a nondescript expression on his face make his more heated outbursts unnerving. It’s enough of an issue that the police chief (Ed Begley) has to get on him. His partners warn him too, namely, the veteran Pop who has his share of ailments while still finding some time to wax philosophical about life.

Soon, enough is enough and Wilson is transferred to a case out in the country tracking down the culprit in the murder of a young girl. And in these moments On Dangerous Ground becomes all too real. He’s actually on thin ice if you want to get really technical, in both the figurative and literal sense. The vengeful patriarch (Ward Bond) is out for blood, waving around his shotgun just waiting to fill someone full of lead. And as it happens, the story becomes a snowcapped manhunt out in the country with Nicholas Ray developing a second distinct world in stark juxtaposition with the first.

If you wait for Ida Lupino’s entrance you will not be disappointed because it is a fabulous one indeed. She and Robert Ryan do make a heady combination as the film devolves into an extraordinary sensitive picture. Ray’s use of closeups near the end is remarkable in creating an immense intimacy between his protagonists. It leads to the question, can a film about police brutality also be about a policeman’s loneliness? In this case, the answer is yes. Because it seems like a great deal of the people within this story are in a similar state. There are frightened youths as well as alienated and isolated individuals who do not know how exactly to deal with other humans. But thankfully we can all learn.

On Dangerous Ground isn’t so much a cynical film as it is melancholy and so, far from seeing its ending as a cop-out, it actually feels like an extension of what Ray was doing all along. It’s this passionate almost spiritual escape from the world at large as reflected in the setting and ultimate outcome. The cop starts to untangle the mess of his life and begins to settle on a firmer foundation. His story need not end in the bowels of darkness. A holiday in the country is still attainable for him.