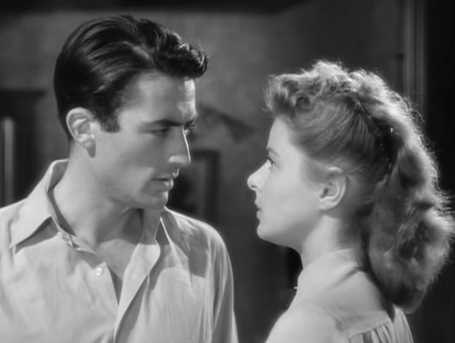 The Fault… is Not in Our Stars, But in Ourselves… — William Shakespeare

It’s so easy to adore Ingrid Bergman and it’s no different in Spellbound. Yes, she starts off as an austere psychiatrist purely interested and invested in scientific thought and practices in psychoanalysis. However, by the film’s conclusion, she evokes the passionate vitality that made her so beloved in pictures such as Casablanca (1942) and Notorious (1946).

The eminent Gregory Peck was still in the dawn of his career and while not your typical Hitchcockian hero, he is Gregory Peck a handsome actor with tremendous presence and a quiet dignity that made him an acting favorite for years to come, shortly to gain the reputation of an undisputed superstar. Put two such icons together and it’s honestly very difficult not to be won over, especially in a Hitchcock picture.

In fact, I’m predisposed to empathize with both of them from the very beginning and to thoroughly enjoy this picture even if it’s hardly the best of Hitchcock or the respective stars. But the story about the female psychiatrist Constance who falls in love with her colleague and subsequent patient one Dr. Edwards does have its share of enjoyments without question, aside from the names above the title.

As with any solid Hitchcock movie, there’s psychological duress and the man is implicated in a murder that he must run away from even if it’s proved he is innocent. So Spellbound is no question a romance and a bit of a mystery wrapped up neatly in a psychological thriller.

Michael Checkov the famed Russian stage performer (and nephew of Anton Chekhov) plays Dr. Brulov, Constance’s old mentor — a charming sort of gentleman who is impertinent but oh so sweet to his friends  — exhibiting the most jovial of personalities.

Even today, there still is a certain logic to psychodynamic therapy as there is to cognitive behavioral therapy that seems believable depending on how it is utilized and who is practicing it. Thus, though there are jumps Spellbound makes that are a little bit preposterous or a little too easy to resolve — like the perfect correlation between dreams and reality — there’s still kernels of truth in this film and it must be lauded for tackling the ideas of Freud in ways that were fairly groundbreaking for their day.

It also boasts the famed dream sequences inspired and partially orchestrated by the acclaimed surrealist artist Salvador Dali. His imprint is undeniable on the images that Peck recounts, reminiscent of the Persistence of Time and other similar works. Even Hitchcock would continue to address these topics with an arguably more Hitchcockian dream sequence in Vertigo and some similar analysis at the end of Psycho to assess Norman Bates.

Of course, Hitchcock films are at their best when the plot is working in spite of dialogue. Though the script is composed by Ben Hecht who has a long list of wonderful accomplishments, there’s also the influence of the overbearing hand of David O. Selznick on the picture meaning it relies perhaps too much on verbal explanation instead of Hitchcock’s own timeless setpieces or visual approach to cinema. Still, he does manage a few perspective shots that are particularly interesting providing us the frame of reference of several of his characters in key moments.

There’s also the benefit of Miklos Rozsa’s particularly elegant score which nevertheless is less a Hitchcock score as Bernard Hermann would famously compose later. In some respects, it suffocates the drama though it does include the cutting edge use of the Theremin, this marking one of its earliest appearances in a film score.

But ultimately, Spellbound does have a delightful false ending, as things slowly spiral down into despair only to find their new conclusion as all the puzzle pieces of Peck’s character begin to fit together. His exoneration is followed by the ousting of the real perpetrator, another quintessential Hitchcock villain.

The summation seems to be that though humanity might be wrought with shortcomings, many of them buried so deep inside, love does have an uncommon power to heal old wounds. The fault might be in ourselves but that need not be the resolution of the story.