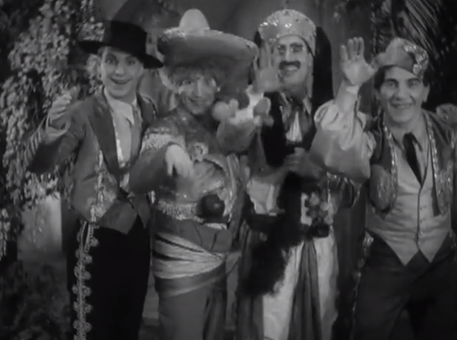 “Did anyone ever tell you that you look like the Prince of Wales?” ~ Kay Francis, Chico, and Groucho.

The Marx Brothers were modern comedians. Out of Groucho Marx alone, there are numerous comics spawned and basking in his incomparable shadow. When certain jokes come out you can all but tip your hat to him. But also Chico and Harpo had their own personas and they worked with each other to simultaneously set up different bits and turn those bits into pandemonium that have overtaken the world with laughter over and over again.

And that’s not over one film or with one studio but over a whole host of projects. For all I know, Harpo Marx went through life mute (I Love Lucy cameos don’t tell me any different) and Chico really did use that accent of his. Even Groucho who was arguably the most visible thanks to You Bet Your Life, What’s My Line, and memorable Dick Cavett interviews, though he lost the greasepaint mustache and eyebrows, still maintained much the same witty image his entire life.

Playing purely the numbers game most comedy teams are duos. Think of most of the great ones. But the Marx Brothers had three and even four when Zeppo was around. They were all family. So when this well-oiled mechanism of chaos is released it really does a number on people. They were known for overwhelming producers in real life with their antics and they do precisely the same thing to each individual audience member who watches them onscreen — at least the ones who don’t mind being railroaded a little. That is their lasting impact.

The fact Cocoanuts was their first film and from the 1920s makes more an impression on my mind. Because talking pictures hadn’t been around for all that long. Sure, some of their gags could have been retroactively transferred to the silent cinema but in many ways, the talkies suited them just fine. After all, they were a vaudeville act and The Cocoanuts was a success on the stage before it was a film. Even during filming, they were already at work on their latest production Animal Crackers (which would again become a film the following year).

Where does that leave us? Looking at The Cocoanuts today, it definitely is stagey because well, it came from a stage play. Furthermore, it’s a rather odd combination having Irving Berlin and The Marx Brothers names attached to the film. Given the main attraction, there’s probably too much singing anyways although the overhead shots soon accredited to Busby Berkeley are quite prominent here.

If we turn our attention to the opening moment, Groucho is on the staircase of the Hotel de Cocoanut giving his restless bellboys some wise words full of crap about money. Meanwhile, a seductive woman (Kay Francis) and her suitor look to steal the priceless necklace of one of the few vacationers (Margaret Dumont) and pin the crime on someone else for their own nefarious purposes. This might not be a criticism you hear often but there’s too much plot and not enough Marx Brothers. 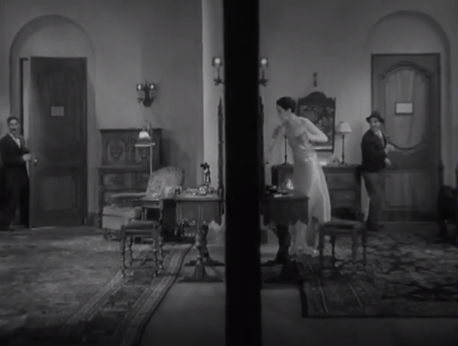 Let’s cut right to the best gags. There’s the adjoining room & slamming door gag which provides one of the most pointed moments where the boys are all working seamlessly together to promote chaos on celluloid.

Groucho and Chico have one of their bits over a map and linguistic disconnect that Groucho riddles with his puns and Chico then decimates with his miscomprehension of English vernacular (Most famously Viaduct becomes Why a duck?). Watch it if you don’t understand what that means. In Marx Brothers terms it’s probably poetry in motion.

There’s an auction, termed a big swindle by Groucho but even with Chico’s involvement in the chicanery, for some unknowable reason, they don’t seem to be making any money. Finally, Groucho and Harpo play Tic Tac Toe on a man’s chest and act boorish at a dinner party before running off for the plot’s real finale. Let’s face it. The picture ended right when they left the stage.

The improv and dynamic nature of the Brothers given their vaudeville roots makes me realize just how much their shows would have been blessed by repeated performances and the heat of the moment. Though we can’t have that luxury at least we have this film to remember those hoodlums who elevated the art form of anarchy and wisecracking to new heights.