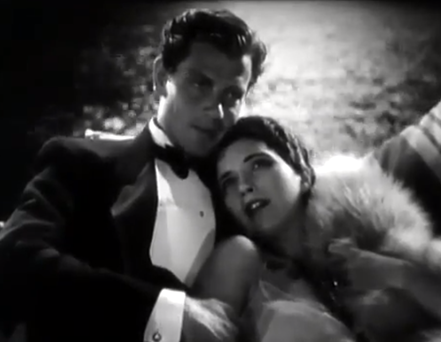 I came to this film for Kay Francis and I stayed because of Kay Francis, George Cukor, Joel McCrea, Eugene Pallette, and Lilyan Tashman. All to say, it is a supreme pleasure to watch this cast in action and already Cukor seems capable of handling the material in a way that intuitively understands the comedy while never losing sight of the romantic heart. That balance seems key.

But we also see another Cukor hallmark with two strong female characters who are central to the film’s integrity. Wanda (Francis) and Marie (Tashman) make a living as girls about town. They are bankrolled to get comfortable with out-of-town businessmen. Because a little female company and a lot of bubbly makes any business transaction go down smoothly.

Marie doesn’t mind the vocation but you can see it in Wanda’s eyes. She’s tired of the same haggard men and droll conversation. She wants something of a little more substance. An actual man and a real relationship.

Yet she concedes to do another gig as part of a yacht excursion that’s looking to schmooze a wealthy whale of a man named Benjamin Thomas (Palette). He also is a self-proclaimed king of practical joking. In fact, he doesn’t know when to quit whether it’s glasses of water or deep sea diving for golf balls. Marie gravitates to him for a laugh.

Meanwhile, Wanda has her eyes set on the younger one, Mr. Benjamin’s associate (McCrea) who isn’t much for conversation or any kind of companionship. As hard as she tries there’s nothing doing. But they finally strike up a compromise by playing “pretend.” Their relationship becomes jovial. The only problem is that Wanda is falling for a man who never meant to romance her. Things get a little too real.

But thank goodness, the feelings are mutual and it looks like they will be together for good. A zoo might as well be the tunnel of love as our two euphoric romantics smooch their way through the animals. At this point, the love story is floating on air. Until Jim mentions marriage.

Here Girls About Town earns its keep as a Pre-Code picture due to its subject matter, the flippancy with which it deals with romance, and even fairly radical views on the necessity of the institution of marriage between two people.  None is the focal point per se but they certainly make the picture quite bold even in what it deems to be the status quo when placed up against films that came a mere three or four years later. The inevitable bomb is dropped but it hits like a pin drop. She’s married already. She doesn’t even bat an eye. Divorce is what is called for and there’s no reason her husband would not grant her one. She hasn’t lived with him for a time.

The films secondary narrative involves Benny’s own wife coming back into his life to try and save his reputation only to join forces with the surprisingly reasonable Marie as they scheme to get the old curmudgeon to spend his money and show his affection for his wife.

The final complication just gets better and better and it keeps the picture interesting. At this crucial stage, Wanda’s spineless husband Alex turns an about face and crosses paths with Jim to talk it out.  Now the indignant Jim smells blackmail and lashes out not only at this man but his formerly soon-to-be wife. You can see the heady implications.

But there’s something more to Alex. Perhaps he’s not the villain we assumed him to be. That would have been too easy. So instead of getting the money back from him, Wanda sets her sights on the next best option. An impromptu auction is undertaken as the girls rally to raise $10,000, complete with a heel for a gavel and a wheeling-dealing Marie presiding.

Certainly, it’s not the necessity but the principle of the matter as Wanda wants to pay her man back to show her true character. She was never looking to take advantage of him and she is willing to go to great lengths to renew his trust. It’s made easier by the fact that he’s torn up about what happened. Now she has him where she wants him. Her days as a girl about town are numbered.

Ernest Haller is our cinematographer and there are several setups that are particularly interesting because they trade out our normal frame of reference as the audience by putting us in different places. The first instance comes in the zoo where we find ourselves literally inside different cages with a bear and then some reptiles.

Then, there’s a later sequence where we similarly end up behind the glass of a display case. And of course, we can’t hear the exchange going on outside but the pantomime gets it across just fine. But the creme de la creme is the flurry of close-ups on Palette’s face when he sees all the jewels that he thought he bought for another woman on his wife. Priceless.